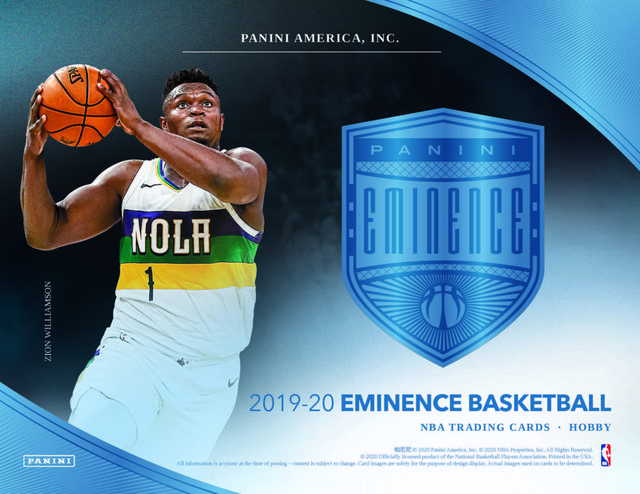 Panini America Returning the High-End Eminence Brand to Basketball for the First Time in Five Years :

Once again, Panini Eminence is imminent.

The most extravagant, highest-of-high-end products
in Panini America’s vast portfolio is making a comeback.

For the first time since the 2014-15 product season,
hoops collectors will have an Panini Eminence to collect

as well as the NBA’s biggest
superstars and legends.

The PIS document for 2019-20 Panini Eminence is available here

will deliver nine autographs
and one additional card.

The estimated release date
for the product is December 23.

The product highlights are many and include . . . 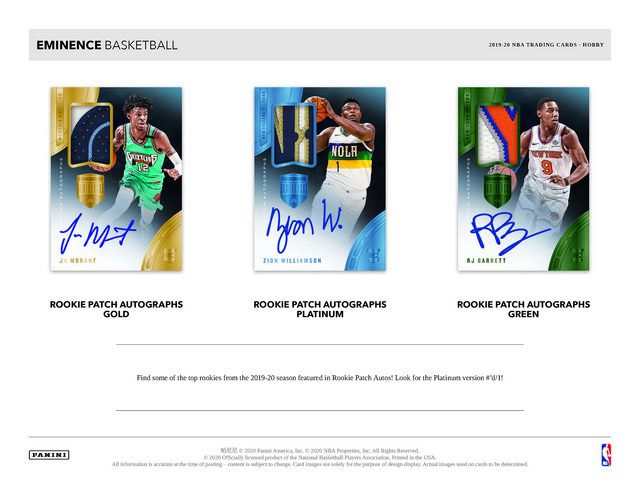 You have your base products.

These give way to smaller, high-end boxes.

From there, you move into super-premium.

But there’s a level above that now luxury lines
that have some of the biggest autographs,

In fact, this is just the third Panini Eminence
release for the sport following its 2014-15 debut

Hobby boxes come with ten cards,
nine of which are autographs.

Every card in 2019-20 Panini Eminence
has no more than ten copies.

All autographs are on-card. Memorabilia
is from game-used items.

This all comes together
with Rookie Patch Autographs.

These come in a few different forms
with one-of-one Platinum being the most rare.

As the name suggests, things are kept simple
as far as themes go, but the end result stands out.

Precious metals and gems make
appearances on the checklist as well.

For the gems, Optimum Diamond Autographs
and All-Star Diamond Signatures are among the options.

Similar to what’s in various Flawless sets,
these cards have diamond embedded in the card.

Silver, gold and platinum bars are in other inserts.

Among them are Larry O’Brien Trophy Signature
Platinum Bar cards that spotlight players who have
come out on the winning end of an NBA Championship.

And they’re going to be expensive.

Panini America has announced the return
of Panini Eminence to its 2019-20 product line.

Set to arrive just as a new season tips off,
it’ll be the highest of the high-end hoops products

What do you get for that much dough? One single-pack
box with ten cards, nine of which are autographed.

Every card will be numbered to 10 or less
and any memorabilia will be game-used.

Each card will come in a magnetic holder
so the boxes will be pretty hefty.

2019-20 was no ordinary year
for the NBA or its trading card partner.

Rookie Patch Autographs will be the big draw
with Zion Williamson, Ja Morant and others

from the ’19-20 draft class signing
directly on the thick card stock. 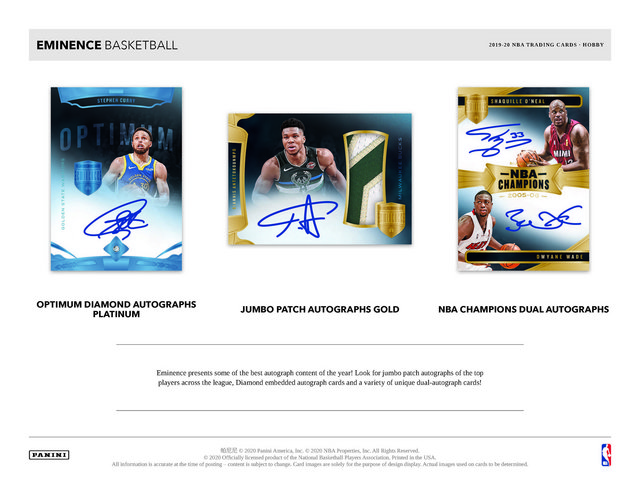 There will be several parallels
including 1/1 Platinum versions.

Also among the top pulls will be cards
with a Silver, Gold or Platinum bar embedded.

A small number will carry autographs.

Cards with a diamond chip embedded
are also on the upcoming checklist.

Several will include Dual Autographs.

2019-20 Panini Eminence is currently
set for release on December 23.

Every card in Eminence is numbered to 10
or less and comes in a magnetic holder.

All autograph cards are signed on-card
and every piece of memorabilia is game-worn.

Look for a deep lineup of autograph
content in Eminence.

Find cards with a Silver, Gold or Platinum bar embedded.

Look for USA Basketball Dual Autograph cards
featuring some of the top names in basketball.

Stretching the '19-20 NBA collecting season a little further
and pushing the cost much higher, 2019-20 Panini Eminence
marks the cardboard return for the expensive brand.

With nine autographs per box, the price
tag falls in the five-figure range. 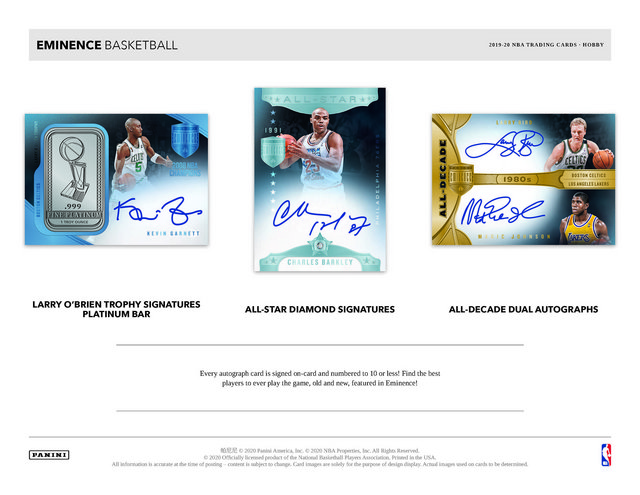 Boasting print runs of 10 copies or less, every card
in 2019-20 Panini Eminence comes in a magnetic case.

For the autographs, there are only on-card options.

That includes the Rookie Patch Autographs line
with Gold, Green and Platinum (1/1) parallels.

On the other hand, Larry O'Brien Trophy Signatures
Platinum Bar has one troy ounce of fine platinum.

These also come in silver and gold bar versions
there are signed and unsigned.

With the autographed memorabilia cards
in 2019-20 Panini Eminence, every relic piece

is game-worn, including the Jumbo Patch Autographs cards. 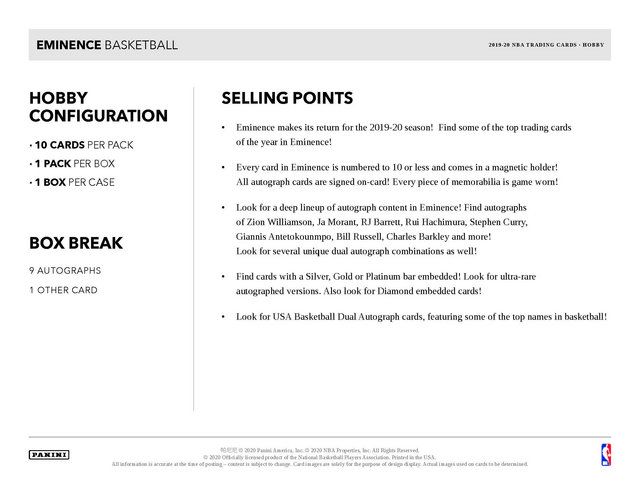 and they will be joined by some of the biggest
legends of the game all in one super-premium spot.

Rookie Patch Autographs lead the way here with Gold, Platinum (#/1)
and Green parallels among those teased for this one,
which will have patches and on-card ink throughout.

(Parallels were not detailed in advance of this release.)

Joining them will be Optimum Diamond autographs jumbo patch
autographs and NBA champions dual autographs on "some of the best
autograph content of the year," according to the company.

All cards here will be limited to no more than 10 copies
and among them will be Larry O'Brien Trophy Signatures
cards that have a platinum, gold or silver bar embedded

into the cards as well as All-Star Diamond sigs
and All-Decade dual-autograph cards.

Among the teased signers here beyond those you see
in the gallery will be Rui Hachimura,
Bill Russell and Charles Barkley.

There also will be USA Basketball dual-autograph
cards to be found here, too. ...

These boxes carry a suggested retail price of $15,000

- 9 Autographed Cards in Every Box!

- Look for a deep lineup of autograph content in Eminence!

- Find cards with a Silver, Gold or Platinum bar embedded!

- Look for USA Basketball Dual Autograph cards,
featuring some of the top names in basketball!

- Every card in Eminence is Limited to 10 or less
and comes in a magnetic holder!

- All autographs are signed On-Card!

Enjoy the preview gallery that follows
and stay tuned for additional information.

Enjoy the sneak peek and stay tuned
for additional details. 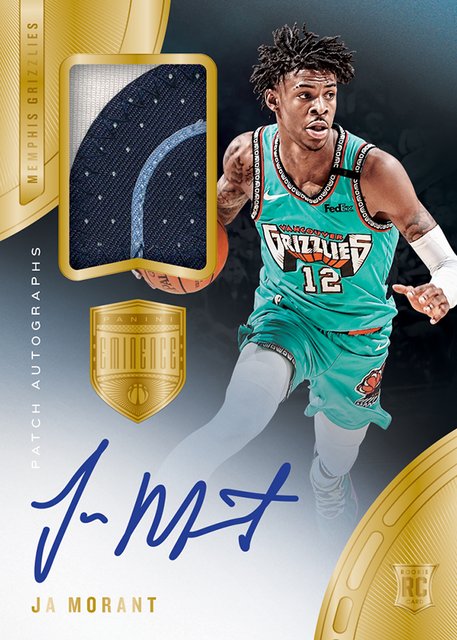 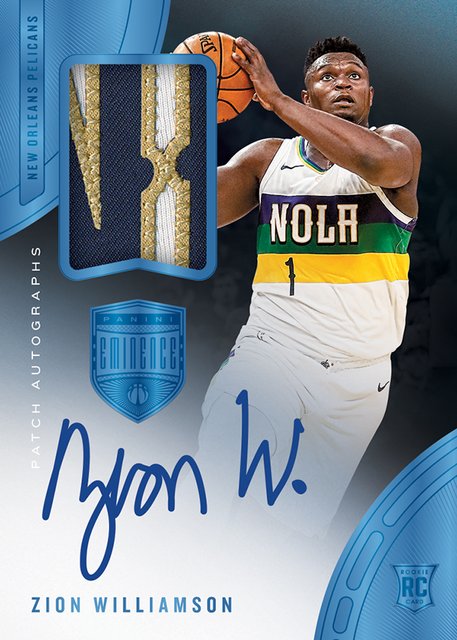 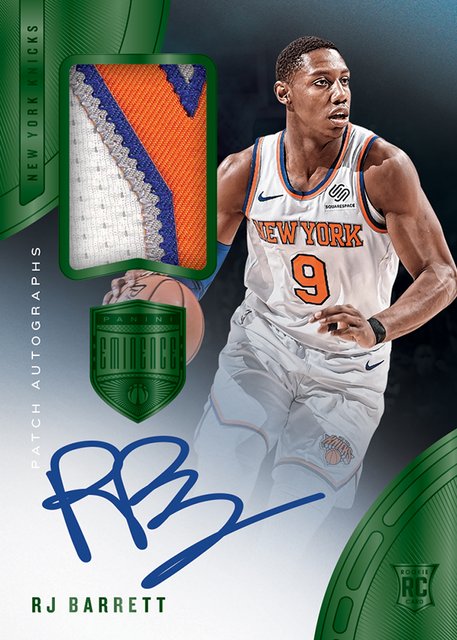 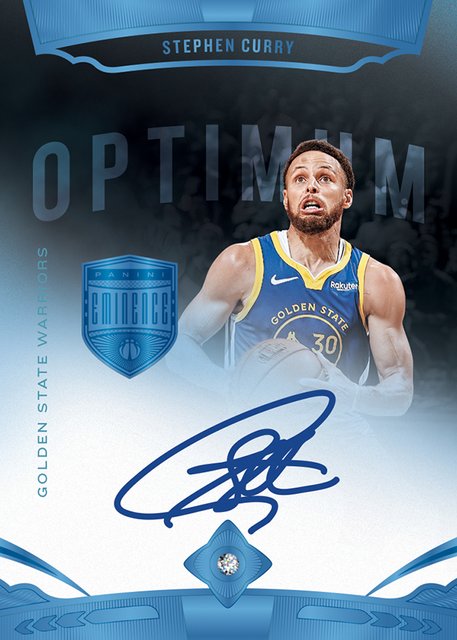 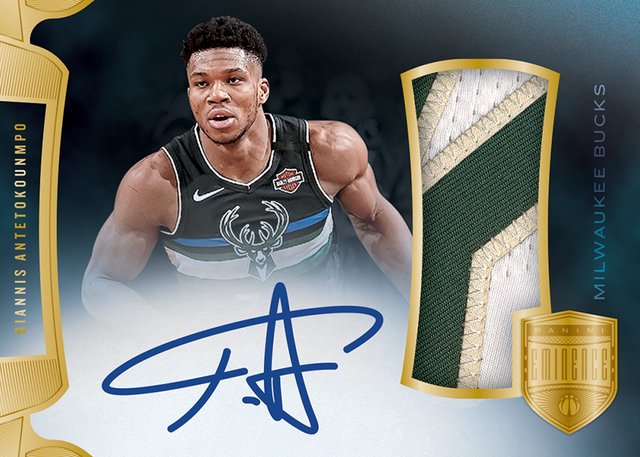 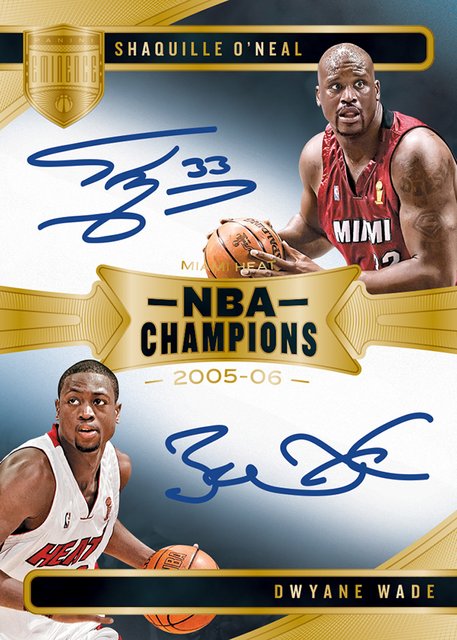 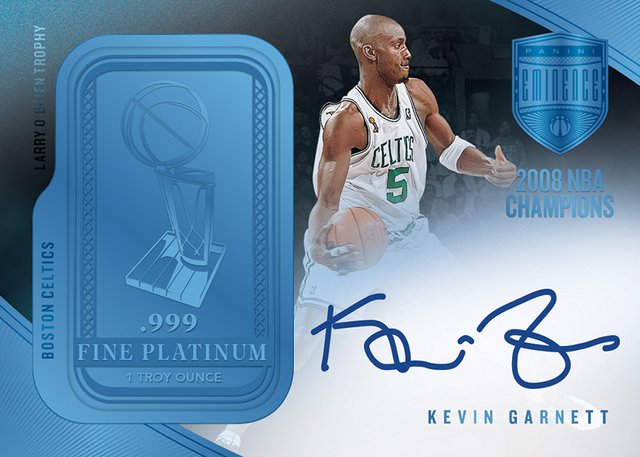 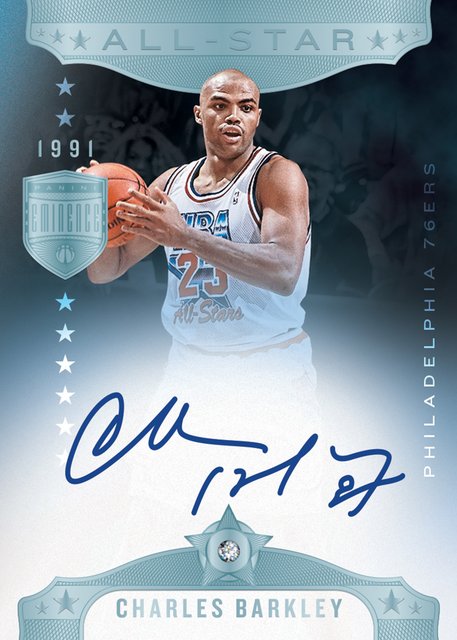 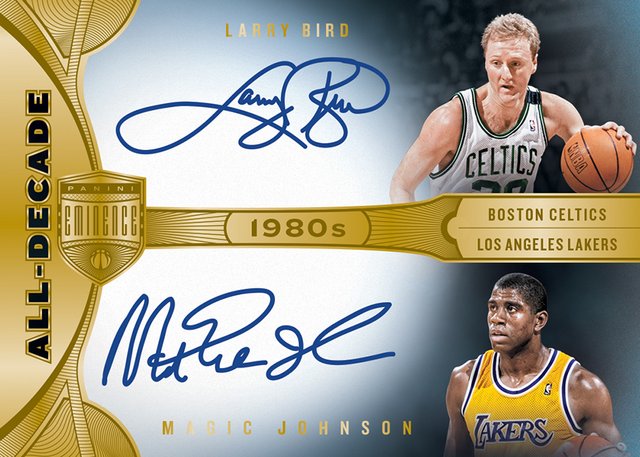 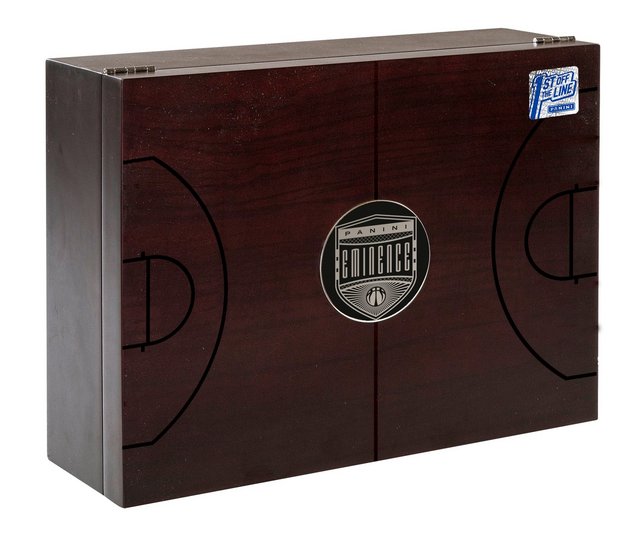 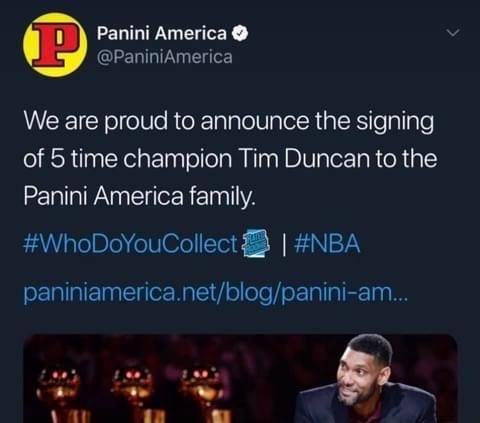 Boxes, on average, hold the 1/1 Rookie Autographs Platinum Bar Card,
8 other autographed cards, and 1 other card!

Limited to 1 box per transaction*

This year's Panini 1st Off the Line Panini Eminence
will be featured in a Dutch Auction Format!

Price Drops every 5 minutes until product sells out.

Buy at any time.

Customers will pay the price that
is active when product is added to cart.

in the limited quantities available for those products
that are part of the 1st Off The Line program.

Look for 1 Rookie Autographs Platinum Bar 1/1 card of either :

Zion Williamson, Ja Morant, R.J. Barrett
or Rui Hachimura in every 1st Off the Line box!

Look for different photo variations from 4
of the brightest young talents in the NBA!

Find some of the top trading cards of the year in Eminence!

Every card in Eminence is numbered to 10 or less and comes
in a magnetic holder! All autograph cards are signed on-card!

Every piece of memorabilia is game worn!

Look for a deep lineup of autograph content in Eminence!

Find cards with a Silver, Gold or Platinum bar embedded!

Look for USA Basketball Dual Autograph cards,
featuring some of the top names in basketball!

SupaKool
Rookie of the year 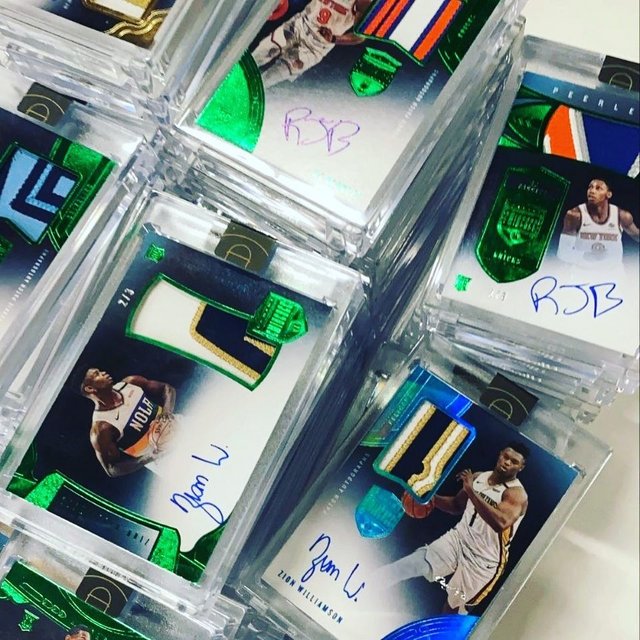 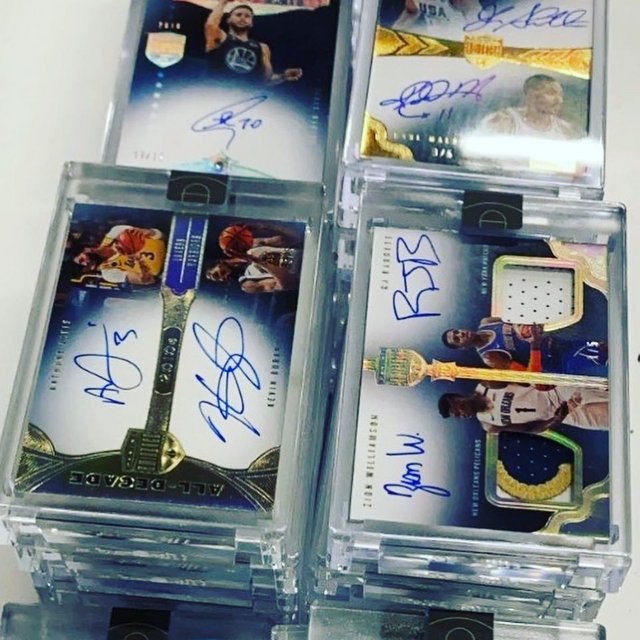 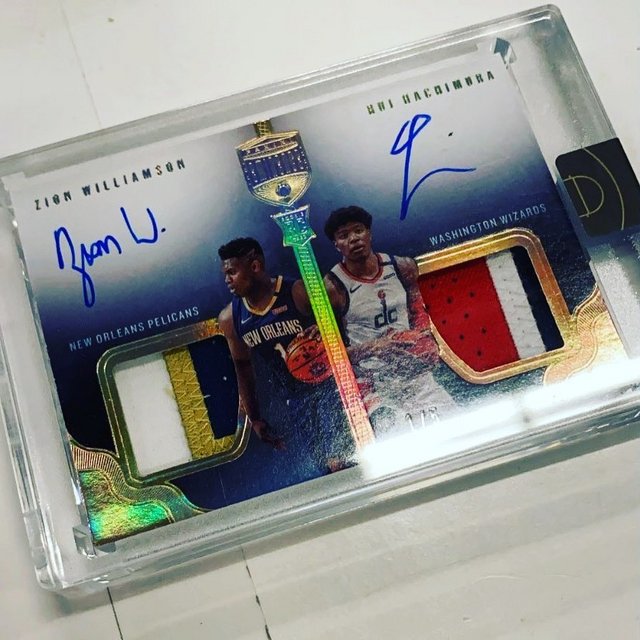 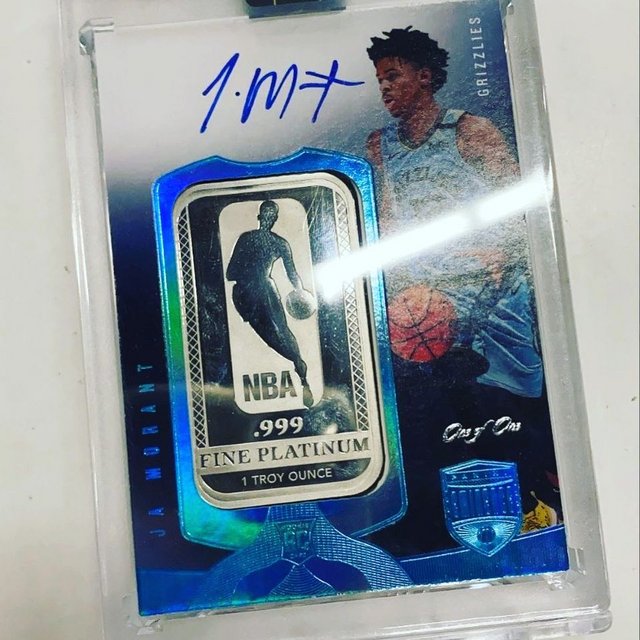 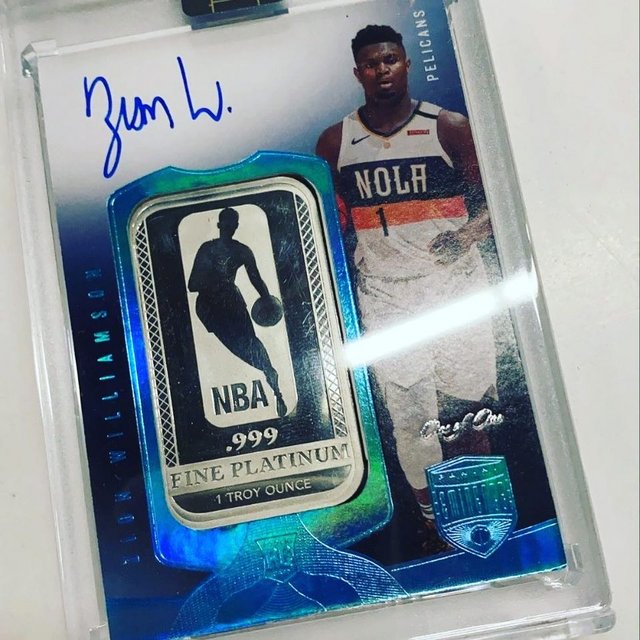