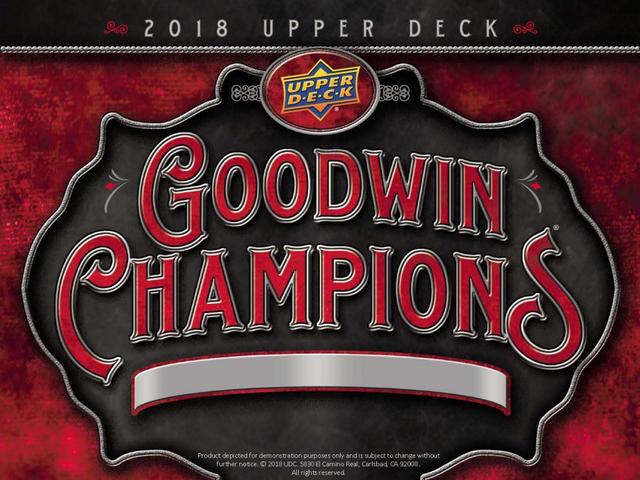 Holding it down as one of the more unique trading card releases each year,
2018 Upper Deck Goodwin Champions is a collecting balancing act of sports,
entertainment, history, literature, and many things in between.

Just as in 2017, each Hobby box contains three hits from
a group that includes autographs,relics, manufactured patches,
or 3D lenticular inserts.

2018 Upper Deck Goodwin Champions has a little of this, some of that
and a whole lot of in between.

Like past installments of the brand, to call it eclectic may be
a bit of an understatement.

The various parts of the checklist cover various sports, history, nature
and more 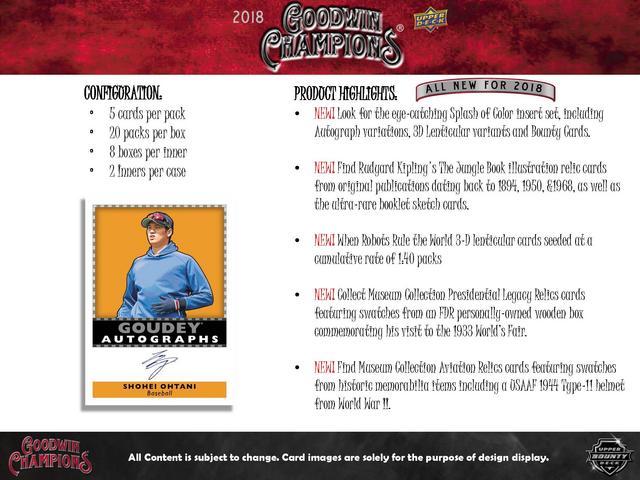 As for the types of cards, there’s plenty of variety there as well.

At the box level, this includes three hits or premium inserts.

These come in the form of autographs, relics, manufactured patch cards
and lenticular inserts.

2018 Upper Deck Goodwin Champions also marks the first time
for the brand to include and Upper Deck Bounty element that rewards collectors
with exclusive cards for finishing specific parts of the checklist. 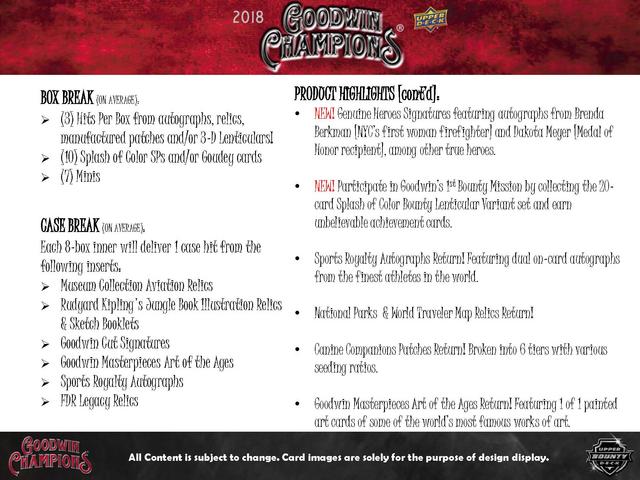 The main part of the base set consists of 100 cards.

Athletes from a bunch of sports, both mainstream and not, appear.

Some other surprises can also be expected.

Building off of these are 50 Splash of Color high
number short prints.

Basic versions are 1:4 packs while Wood Lumberjack are approximately
one per hobby box, landing 1:20 packs.

Another seasoned component of the brand, Goudey inserts combine
with the Splash of Color SPs to fall in every other pack.

These total 10 cards per box between the two sets. 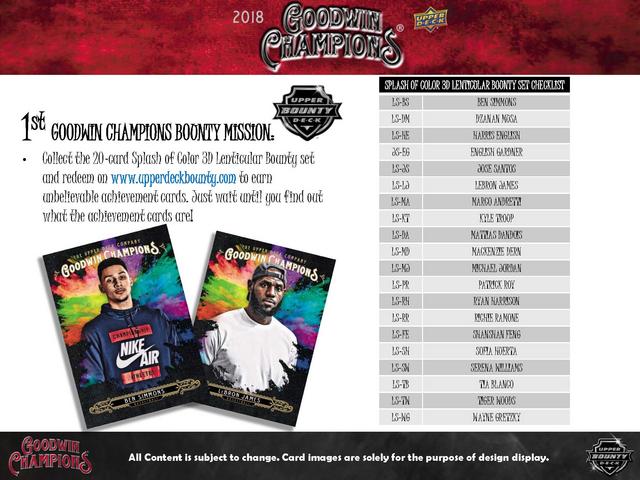 More unique, the Genuine Heroes (1:320) line celebrates those men and women
who made their mark on the world, like Brenda Berkman, the first female firefighter
in New York City, or Medal of Honor recipient Dakota Meyer.

On-card signatures are the theme for the 2018 Upper Deck Goodwin Champions autographs.

In addition to the regular versions are Inscribed versions that come numbered
to varying amounts and tough Splash of Color Autographs (1:1,280). 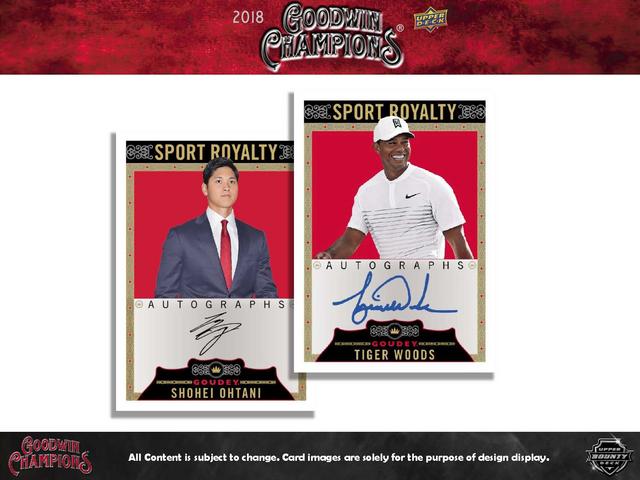 Among the signers in 2018 Upper Deck Goodwin Champions are several of the company’s exclusives
like Michael Jordan, Ben Simmons, Wayne Gretzky and Tiger Woods.

Serena Williams also has autographs in the product. Shohei Ohtani has new cards added
to his growing autograph checklist, the first from Upper Deck.

Genuine Heroes Signatures (1:320) honor a small number of those who have served
and helped their communities.

The nine-card checklist is filled with inspiring stories.

Jennifer Maddox is a Chicago police officer who established a South Side after school program
to help kids with tutoring and mentoring.

Khali Sweeney has a boxing gym for at-risk children in Detroit that doubles as an academic tutoring hub.
To most, these people might not be well known in the celebrity sense but all have made big impacts
on peoples’ lives.

The small number of autographs in the product that aren’t on-card
are one-of-one Goodwin Cut Signatures. 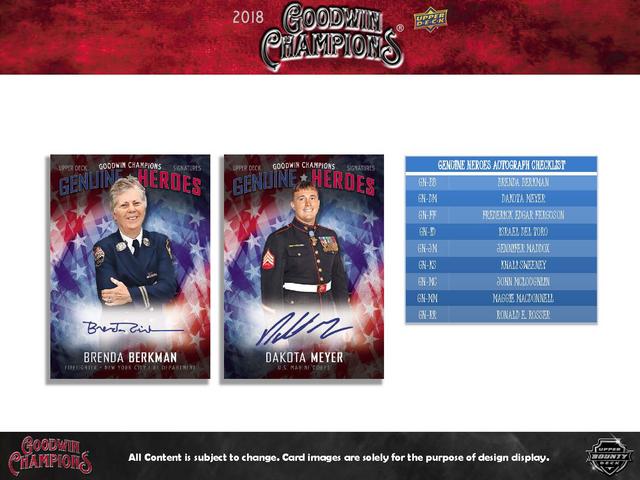 For 2018 Upper Deck Goodwin Champions relics, the choices touch on dogs,
travel, historical flights, and even a timeless children's story.

The tiered patch rarity is broken down into six different groups.

The 40-card set offers swatches from items worn in the air during World War II
and even some relics from notable trips to space. 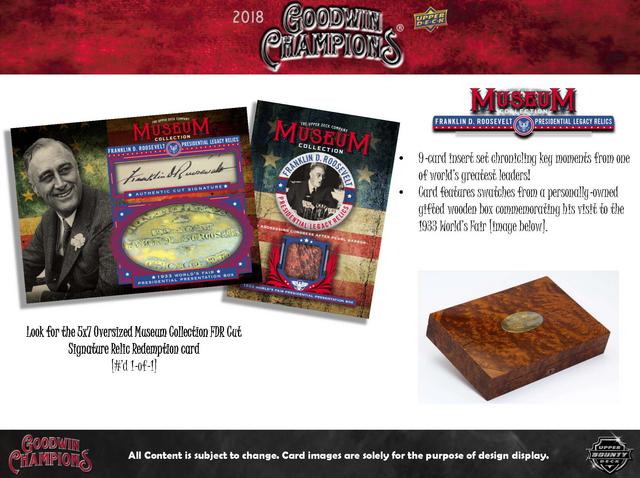 Centering on the famed collection of stories, the Rudyard Kipling’s
The Jungle Book Illustration Relics (1:3,200) set contains original images
from various editions, including the initial 1894 release.

And it wouldn't be Goodwin Champions without the one-of-one Goodwin Masterpieces
Art of the Ages cards, featuring hand-drawn recreations of legendary artwork.

Really showcasing the variety in 2018 Upper Deck Goodwin Champions, the memorabilia
side of the product comes via Goodwin Memorabilia (1:30),

Each memorabilia set also has a numbered Premium parallel. 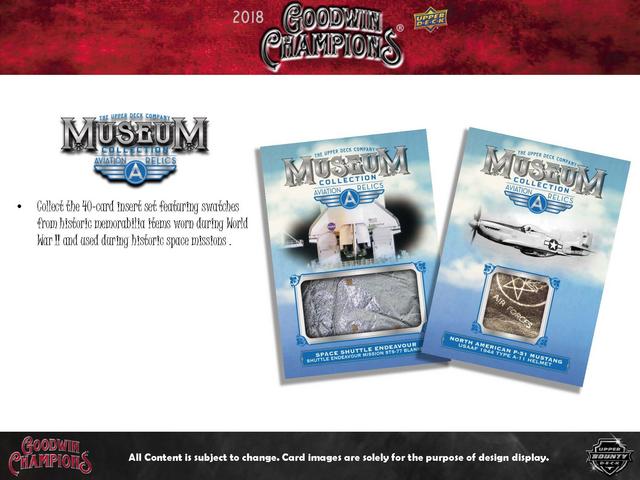 Relics go beyond articles of clothing and other gear.

It takes a sharp veer into the realm of historical memorabilia. 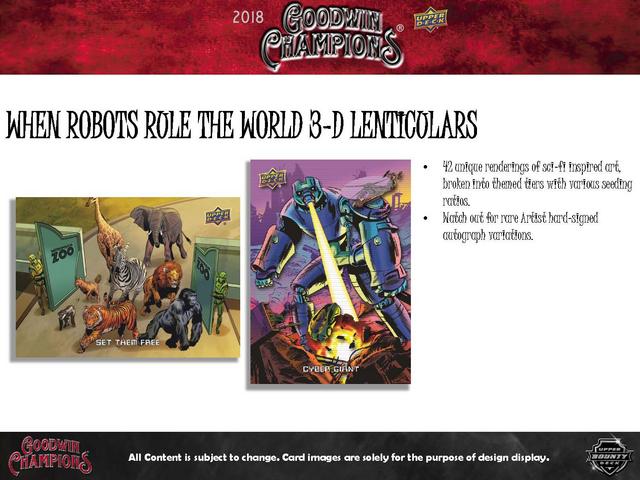 Both come with pieces of maps embedded in them.

For the National Parks map cards, they’re numbered to varying amounts ranging
from a high of 90 copies down to a low of 17.

The 40-card set comes with pieces of WWII artifacts as well as those used
on space missions.

Relics are 1:480 packs while Museum Collection Aviation Jumbo Relics
are much tougher at 1:1,920. 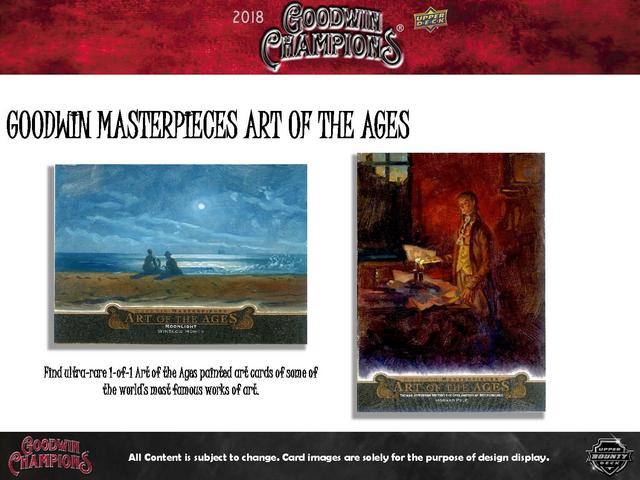 These nine Presidential Legacy Relics (1:4,000) have pieces of a wooden box he was gifted
for visiting the 1933 World’s Fair in Chicago.

There’s also one over-sized redemption that also has a cut signature.

Following in the footsteps of Alice and Wonderland and The Wizard of Oz
come The Jungle Book Illustration Relics (1:3,200).

These take the relic concept and apply them to images
from original copies of the Rupyard Kipling classic. 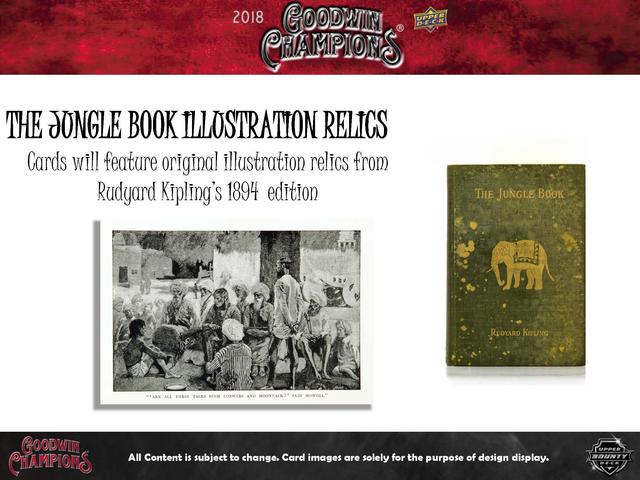 Goodwin Masterpieces Art of the Ages are all hand-painted recreations of some
of the most famous masterworks in history.

Each is a one-of-a-kind.

And lastly, the Splash of Color 3D set works with the Upper Deck Bounty Program
to award what UD describes as "unbelievable achievement cards."

Collectors must collect the very tough 20-card set to redeem the bounty. 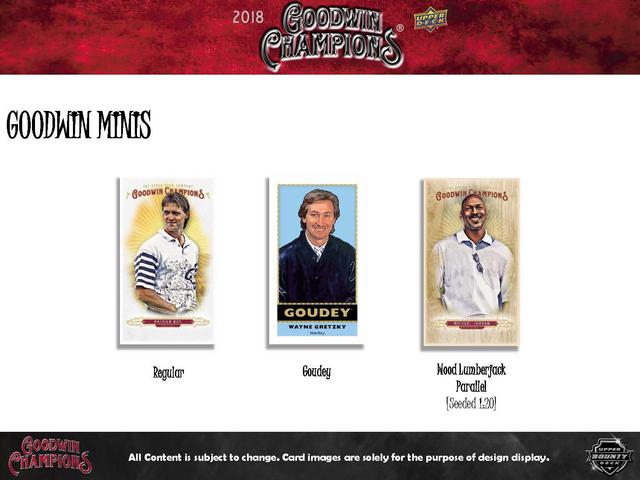 That includes the 42-card When Robots Rule the World 3D (1:40 overall),
in varying tiers, which imagines how different things might be
if the robots rise up against humanity.

Signed versions from the artist are also in play.

This marks the second year for the premium insert set that celebrates man’s best friend
(unless you fancy yourself as more of a cat person).

These come with six different tiers of rarity.

The most common are 1:83 packs while the “Flying Dogs” portion of the checklist
is the toughest at 1:7,500 packs. 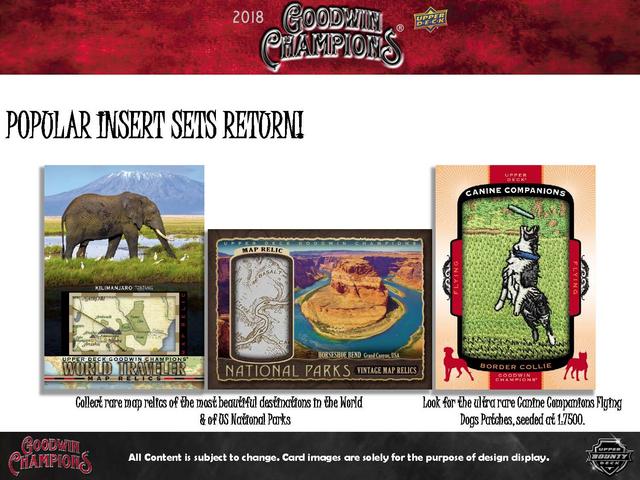 When Robots Rule the World (1:40) tell a Sci-fi story over 42 cards,
all using lenticular 3-D stock.

Like the patch cards, these have several levels of rarity to add
to the challenge of building the full set.

Autograph versions signed by the artist are randomly inserted.

As far as regular inserts go, Goudey are fairly easy to pull at 1:4 packs.

Each 8-box inner will deliver 1 case hit from the following inserts :

- NEW! “When Robots Rule the World” 3D Lenticular Cards – Seeded at a cumulative rate of 1:40 packs.

– Featuring swatches from a personally-owned gifted wooden box commemorating his visit
to the 1933 World’s Fair.

- Also, collect the nine-card insert set chronicling key moment
from one of the greatest leaders in US history.

– Find illustration relic cards from publications dating back to 1968,
1950 & 1894, as well as the ULTRA-RARE sketch booklet cards.

- Look for dual on-card autographs
from some of the finest athletes in the world.

– Returning for 2018! Featuring map relics of the most beautiful destinations
in the world.

– Returning for 2018! Broken into six tiers with various seeding ratios.
- Goodwin Masterpieces Art of the Ages

– Returning for 2018! Featuring 1-of-1 painted art cards
of some of the world’s most famous works of art.

- 100 Card Base Set – Highlighted by athletes and personalities
from a wide array of interests. 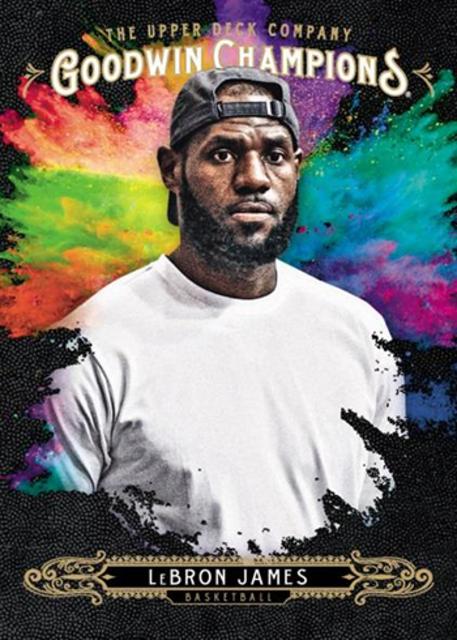 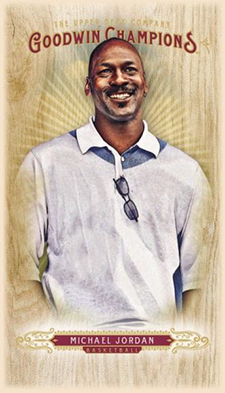 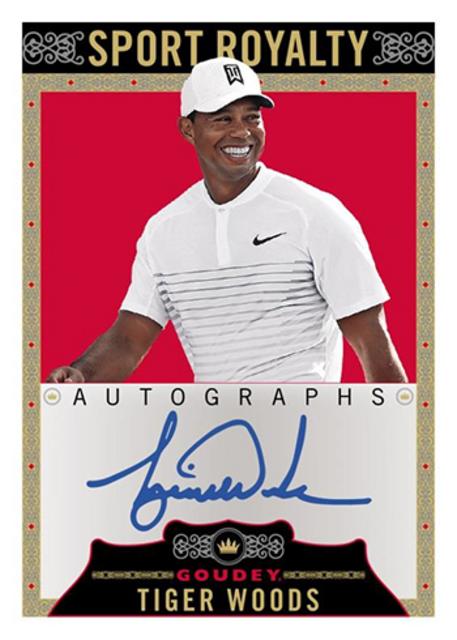 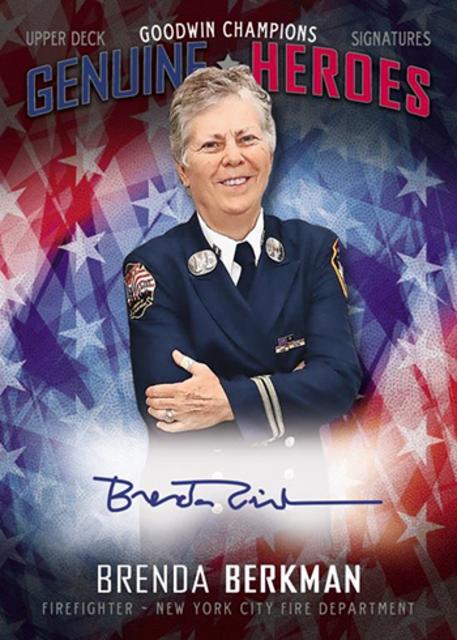 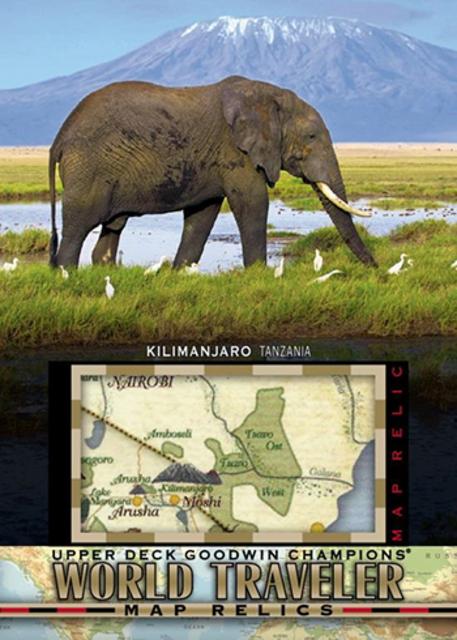 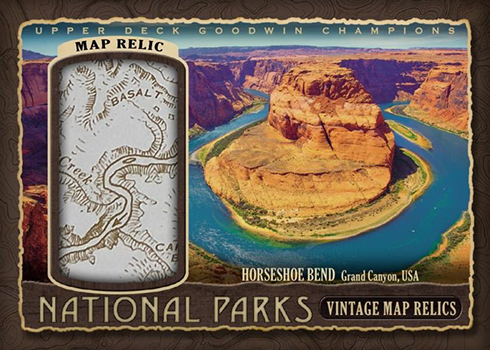 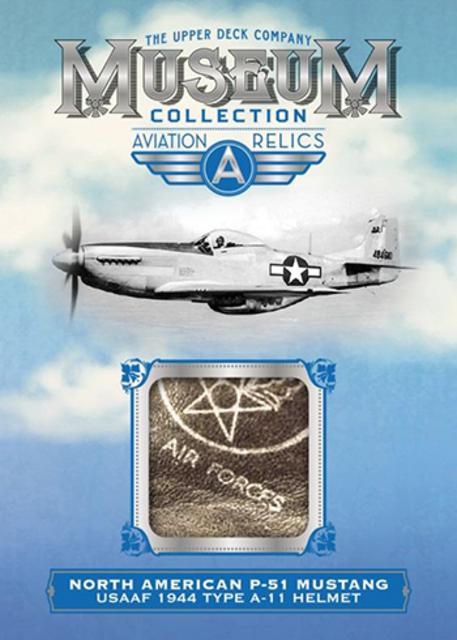 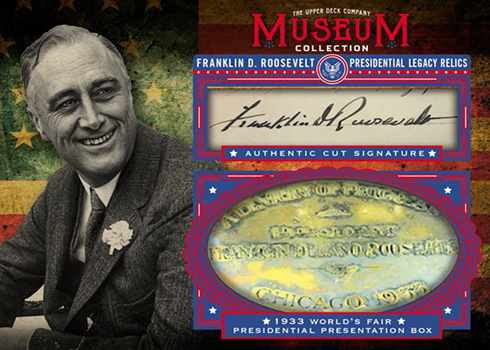 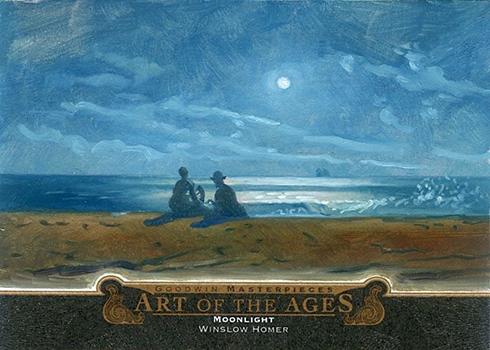 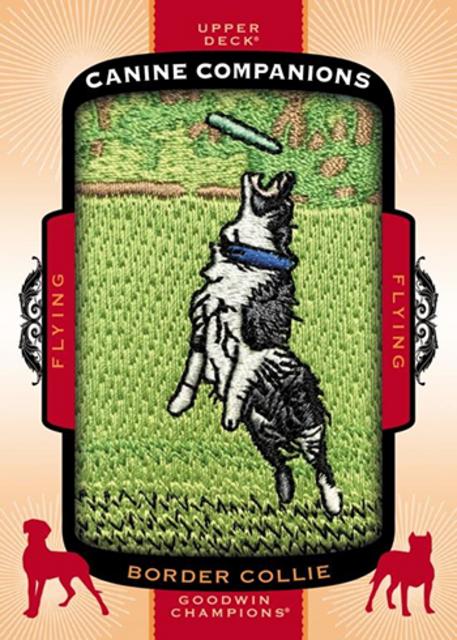 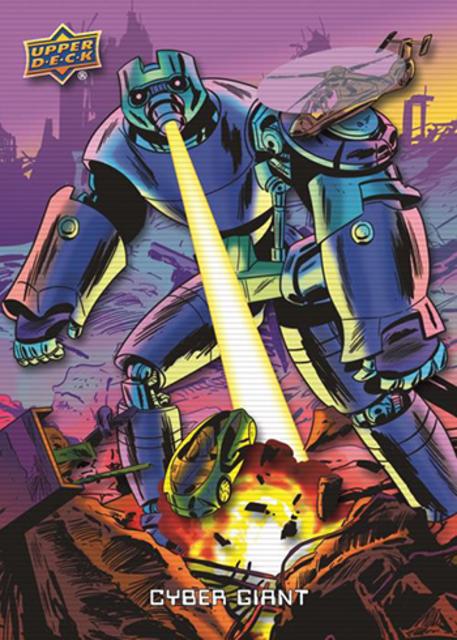 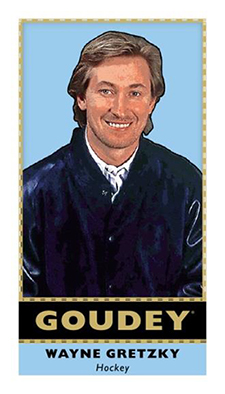 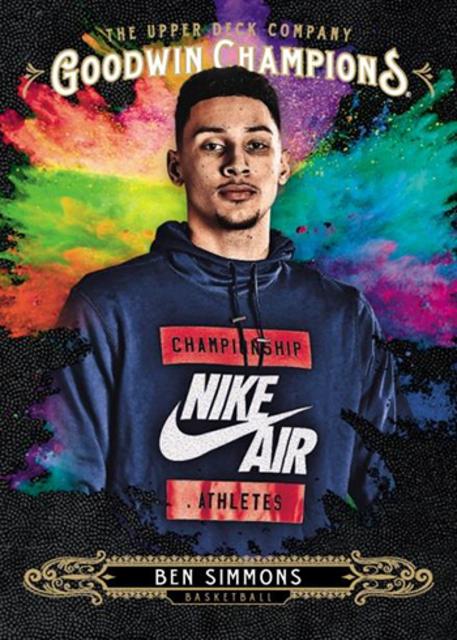