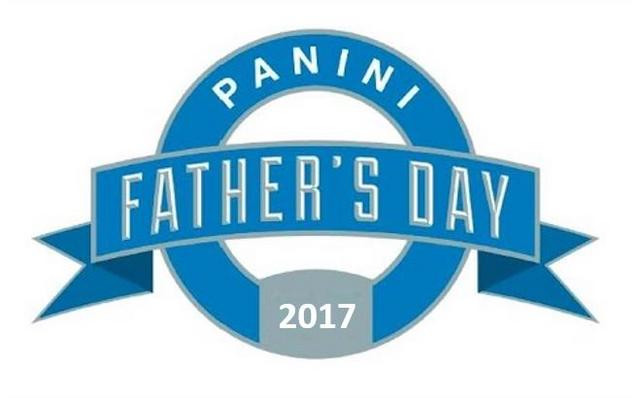 If the country’s finest sellers of bad ties, “World’s Greatest Dad” coffee mugs and designer boxers have experienced
a significant slump in the last five years (especially in the country’s hottest collecting markets), well, we apologize.

Indeed, since bursting onto the scene in the summer of 2012, Panini America’s annual Father’s Day hobby shop
promotion has fundamentally altered the way kids and their moms shop for Dad on his special day.

With the bold introduction five years ago of a wrapper-redemption program intended
to replicate the wild success of the company’s Black Friday promotion,

Along the way, the program has strengthened the unique family bond that collecting creates between a father and his children.

Boasting a holiday-exclusive card set featuring a plethora of unique memorabilia
and autograph inclusions, this year’s offering looks to be one of the most content-rich yet.

The 2017 Father’s Day set should arrive in participating hobby shops today — if they haven’t arrived already.

To help properly prepare you for this year’s special set, we provide a comprehensive gallery of must-see sights below.

Enjoy the gallery — which includes the base set, Rookie Card subsets, Panini Collection and more
and stay tuned for continued coverage of the Panini America 2017 Father’s Day promotion.

Although the promotional product in honor of dad has become an annual tradition, the 2017 Panini Father's Day checklist tweaks the format
with two different pack options.

This includes NFL packs with only football players,
and multi-sport packs that feature most of the other sports under the Panini banner.

Leading off, the 2017 Panini Father's Day NFL packs naturally focus on top football players
with a base set highlighted by serial numbered rookies from the 2017 draft class.

There are also limited Autographs and Memorabilia cards as an added chase element.

The football packs are earned by purchases of 2016 and 2017 Panini Football products.

Ranging from one to five packs per box, refer to your LCS for specific details on the total packs awarded for each box you buy.

Covering the rest of the Panini sports, including baseball, basketball, NASCAR and soccer, the Multi-Sport set matches the football version
with its own base set, numbered rookies, Autographs and Memorabilia cards.

These packs are earned from a wider variety of box purchases,
including various 2016-17 Basketball, 2017 Baseball, 2017 Racing and 2017 Soccer products.

The 2017 Panini Father's Day Multi-Sport packs are also distributed based on the product purchased
and some tie into other Panini promotional packs.

The phenomenon known as the 2017 Panini America Father’s Day promotion continues to gain serious momentum
in these final days leading up to, well, Father’s Day.

In fact, excitement surrounding the promotion seems to grow even more palpable
and more insane with each passing day.

Yesterday we brought you, at long last, a comprehensive gallery of this year’s base cards,
Rookie Cards, base inserts and more.

In the gallery below, we offer a brief glimpse at some of the 2017 set’s parallels,
autographs and memorabilia cards.

As is the case every year, we’ve had many collectors ask how they can get involved if there are
no participating brick-and-mortar hobby shops in their area.