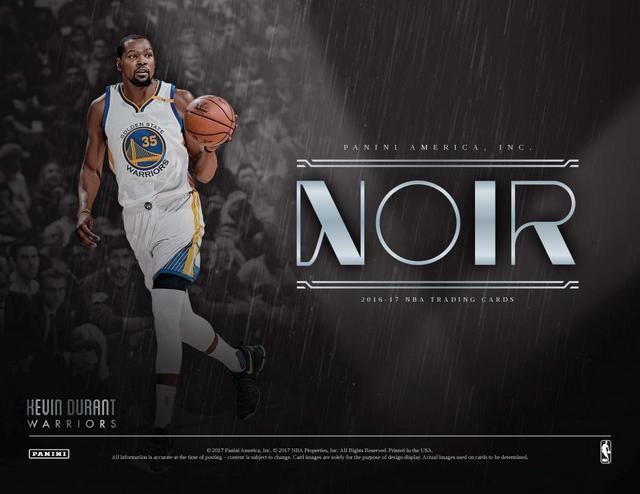 During its first two years on the market, Panini America’s unique Panini Noir franchise has succeeded by being . . . different.

Through dark aesthetics and a movie motif, Panini Noir has won critical acclaim
by eschewing the predominantly white color palette normally associated with high-end releases in favor of something much darker.

As a result, the product has yielded some of the most attractive single cards in the basketball universe
(for proof, look no farther than Noir’s spectacular Spotlight Signatures insert).

and while the third annual Noir offering will include the best elements from those first two releases,

it will also boast a new configuration that features four 10-card boxes per case. On average,
each 10-card box will deliver seven autograph or memorabilia cards.

For the past couple of seasons, Panini America has put together an aesthetically-pleasing summer release which serves as
a nod to the film noir genre and it is back again with the impending arrival of 2016-17 Panini Noir.

With a slightly-altered configuration that goes from 12 to 10 cards per box, collectors can still expect
to find seven autograph or memorabilia cards inside along with the possibility of all-new framed cards when it comes out on July 12.

There are no early details which discuss the makeup of the 2016-17 Panini Noir base set,
but there are three cards per box which could potentially include base, parallels, or inserts.

ticking with the themed looks from its short brand history, 2016-17 Panini Noir offers high-end NBA cards with a quality design.

Although the total cards per box decreased from the 2015-16 product, which had 12,
the hits remain the same with seven autographs or memorabilia cards.

New in 2016-17 Panini Noir is an assortment of Metal Frame cards. Spread out over several different varieties, look for veterans and rookies
in addition to themes such as Curtain Calls, Encore,

and the visually striking Vintage Art which feel like an old-time movie poster and are limited to 25 copies each.

Part of the new additions to 2016-17 Panini Noir, Metal Frame inserts, numbered to 25 copies, are exactly as they sound.

In addition to subsets for Veterans and Rookies, other Metal Frame options include Curtain Calls, Vintage Art
and Encore, which highlights top player performances.

Despite no mention of a base set, since there are ten cards per box and only seven are hits, that likely leaves the door open for more choices.

Last season had a fairly large base set with 200 cards.

While they are issued in several different versions, the Rookie Patch Autograph cards all contain on-card signatures
and quality swatches.

Collectors can track down their favorite rookies in Black and White, Color, Horizontal and Tags.

Among the other signed inserts are Autographs Prime Color cards.

Rookie Patch Autographs are going to be a major draw for those breaking open boxes of 2016-17 Panini Noir, especially
due to the fact that they are hard-signed.

While all versions are expected to be limited in nature, collectors will have their hands full with sets such as Black
and White, Color, Horizontal, and Tags.

Spotlight Signatures has a classic look and look sharp with autographs in gold ink.

They will have both horizontal and vertical versions.

The checklist is expected to have a strong mix of players from the past and present along with prime pieces of memorabilia.

Additional highlights of the deliciously dark 2016-17 Panini Noir include :

Until then, however, enjoy this extended sneak peek, which includes an early look at pre-ink versions of Spotlight Signatures . . .

- 7 Autographed Cards or Memorabilia Cards in Every Box!

We’ll have much more to preview on 2016-17 Panini Noir in the coming weeks right here on The Knight’s Lance.

Is it just coincidence that this latest showcase of Panini America’s newest on-card ink arrives today, the official first day of summer? Probably.

Nonetheless, after seeing the hard-signed stunners that follow, there’s absolutely
no denying the heatwave of hits in store over the next several months.

By the way, we’ll have a complete Quality Control Gallery for 2016-17 Panini Spectra tomorrow. Stay tuned.