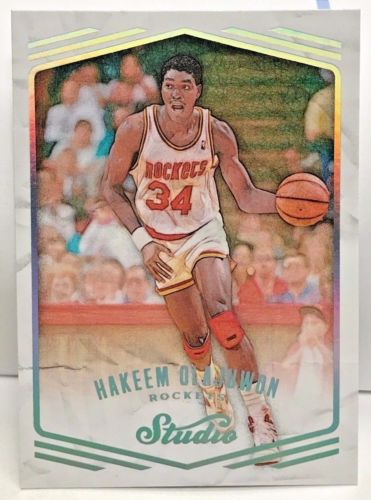 After a seven-year absence, 2016-17 Panini Studio marks the return of one of the most iconic trading card brands of the 1990s.

There is one autograph and one memorabilia card per box, but there have been some interesting tweaks made
to the brand’s format and configuration since it last released in 2009-10.

The 300-base set for 2016-17 Panini Studio Basketball poses as a challenge to even the most advanced of collectors.

The next subset is Studio Edition and the design is quite reminiscent of what the set looked like 20 years ago.

These are seeded 15 per box. Where the major challenge comes in is with the Sketch subset (cards 201-300).

Only dropping once per box, they have sketch-art photography.

For those that like inserts with strong designs and themes, 2016-17 Panini Studio offers up some solid options to collect.

Rock Solid has a unique die-cut look while Top Five has a rotating background featuring the best rookies from this season.

The big chase is for From Downtown!, which has original artwork and is a rare pull at one per inner case.

As stated above, collectors will find one signed card and one memorabilia card inside boxes of 2016-17 Panini Studio.

Two autograph concepts include Celebrated Signatures, which turns the focus on both big names and legends.
Breakout Signatures mixes rookies and veterans.

Memorabilia cards come in three themes : Gamers, The Influencers and First Impact.
Each has a few levels of numbered parallels numbered as low as 1/1.

How long has it been since Panini America last delivered a Studio Basketball product to the marketplace? That’s a rhetorical question, really.
But it’s been a while. Like, almost 1,900 Stephen Curry 3-pointers ago.

In fact, when 2009-10 Studio arrived in the winter of 2010, Curry was still a rookie,
along with the rest of that celebrated class that included James Harden, Blake Griffin,
DeMar DeRozan and more.

A lot has changed in the seven or so years since that maiden Studio Basketball release.

Griffin and Harden and DeRozan are known throughout the world.
And Panini Studio is about to make a rousing return to the hardwood.

Each tier grows increasingly tougher to pull with Studio Edition falling approximately 15 per box
and Sketch falling roughly one per box.

(six cards per pack, 10 packs per box, eight boxes per inner case, two inner cases per master case)
will deliver one autograph and one memorabilia card.

In the revealing Quality Control Gallery that follows, we offer a captivating preview of the multidimensional 2016-17 Panini Studio.

Enjoy the imagery and stay tuned to The Knight’s Lance for continued coverage.

The wait is almost over. Two short days from now, Panini America’s Studio franchise makes its highly anticipated
return to the hardwood for the first time since the 2009-10 season.

And as you’ll discover when the product releases on Friday, Studio has added to its repertoire
a flair for the dramatic and a diverse base set.

Each tier grows increasingly tougher to pull with Studio Edition falling approximately 15 per box and Sketch falling roughly one per box.

On average, each hobby box of 2016-17 Studio Basketball (six cards per pack, 10 packs per box, eight boxes per inner case,
two inner cases per master case) will deliver one autograph and one memorabilia card.

You got an extended peek at the product with last week’s Quality Control Gallery.

Enjoy the imagery and stay tuned to The Knight’s Lance for additional coverage.