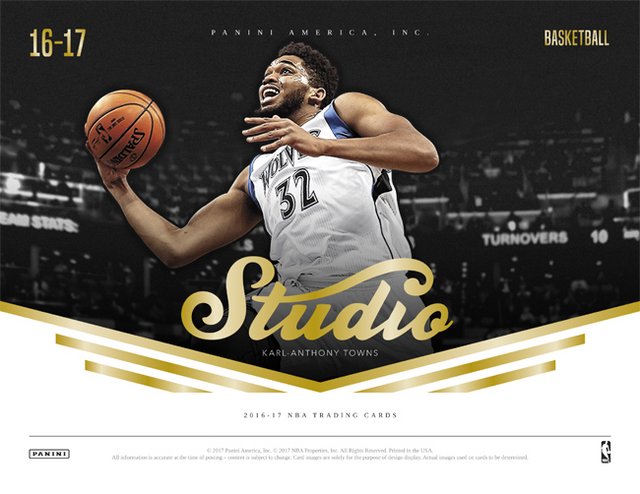 But the passage of time has done nothing to diminish the feel-good vibes most collectors get when they think of the longtime trading card fixture.

And that’s a good thing considering Panini America is returning Panini Studio to the hardwood in late May.

Each tier grows increasingly tougher to pull with Panini Studio Edition falling approximately 15 per box and Sketch falling roughly one per box.

eight boxes per inner case, two inner cases per master case) will deliver one autograph and one memorabilia card.

After a seven-year absence, 2016-17 Panini Studio marks the return of one of the most iconic trading card
brands of the 1990s and it hits stores at the end of May.

There will one autograph and one memorabilia card per box, but there have been some interesting tweaks made
to the brand’s format and configuration since it last released in 2009-10.

The 300-base set for 2016-17 Studio will pose a challenge to even the most advanced of collectors.

Split into three tiers, the action starts with 100 cards that feature game action photography.
The next subset is Studio Edition and the design is quite reminiscent of what the set looked like 20 years ago.

These are seeded 15 per box. Where the major challenge comes in is with the Sketch subset (cards 201-300).
Only dropping once per box, they have sketch-art photography.

At this time, no parallel versions have been announced for the base set.

- The ultra-rare From Downtown! insert that features original artwork seeded one per inner case on average.

- The 15-card Celebrated Signatures insert showcases the top talent in the game mixed
with all-time NBA greats such as Shaquille O’Neal, Oscar Robertson and Kareem Abdul-Jabbar.

- Studio Signatures offers a tip of the cap to the classic designs found in the 1990s Studio releases.
- Breakout Signatures honors both NBA rookies looking to breakout and established veterans who’ve already made the leap.
- The die-cut Rock Solid insert with a design as unique as the players in the set.
- All memorabilia sets in Studio Basketball feature rare Prime versions.

For those that like inserts with strong designs and themes, 2016-17 Panini Studio offers up some solid options to collect.
Rock Solid has a unique die-cut look while Top Five has a rotating background featuring the best rookies from this season.

The big chase is for From Downtown!, which has original artwork and is expected to be a rare pull at one per inner case.

As stated above, collectors will find one signed card and one memorabilia card inside boxes of 2016-17 Panini Studio.

Two autograph concepts have been announced thus far, including Celebrated Signatures,
which turns the focus on both big names and legends. Breakout Signatures mixes rookies and veterans.

The only type of memorabilia card teased at this time is Gamers.
It, like all other memorabilia sets in this product, will have a Prime version.

The Basics : The base set will consist of 100 action photos, 100 Studio portraits and 100 “sketch-art” card.
There will be 15 Studio cards per box and just one sketch per box.

From Downtown! inserts will be found two per case (one per inner), while Celebrated Signatures will showcase top players
with legends such as Shaquille O’Neal, Oscar Robertson and Kareem Abdul-Jabbar.

Other autographs will include Breakout Signatures and Studio Signatures, which has a distinct throwback look
to past Studio releases. Boxes carry a $100 suggested retail price.

After sitting on the bench since the 2009 set, 2016-17 Panini Studio sees the brand rebooted.
This includes an updated format that yields one autograph and one relic per hobby box.

Split into three groups, the 2016-17 Panini Studio base set extends to 300 total cards.

The first 100 cards work with action images while cards #101-200 are part of the Studio Edition subset.
These display player portraits and average 15 per box.

Promising one signed card per hobby box, 2016-17 Studio autographs include an homage
to prior designs with Studio Signatures.

Also averaging one per hobby box are the relics. Among the choices are the Gamers inserts.
Prime parallels add rarity and quality swatches to all the memorabilia sets.

Rock Solid is a die-cut option and Top Five puts the focus on the rookie class with five first-year players on each card.

What’s buzz-worthy : Studio returns to the hardwood for the first time since 2009
with a 300-card tiered base set and plenty of hits.

- From Downtown – Showcase original artwork and is SUPER RARE at just (1) in Every Inner Case!

- Rock Solid – The die-cut design is as unique as the players featured in the set!
- Top Five – Check out the rotating background featuring five top rookies from the 2016-17 NBA season!

We’ll have plenty more on the triumphant return of Studio in the coming weeks right here on The Knight’s Lance.

But until then, enjoy this extended sneak peek :