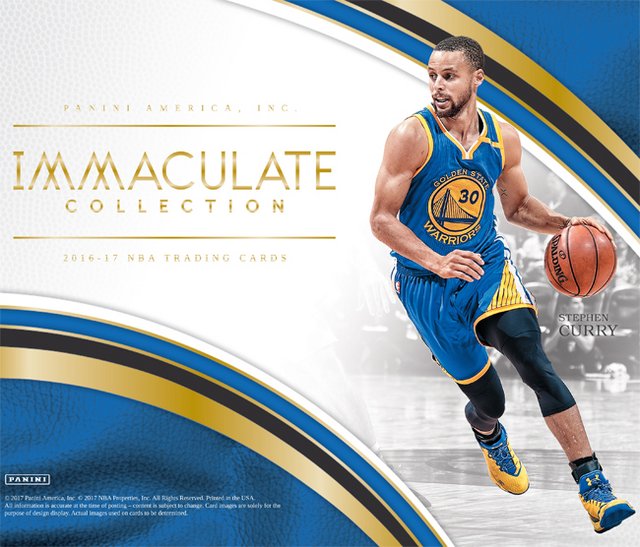 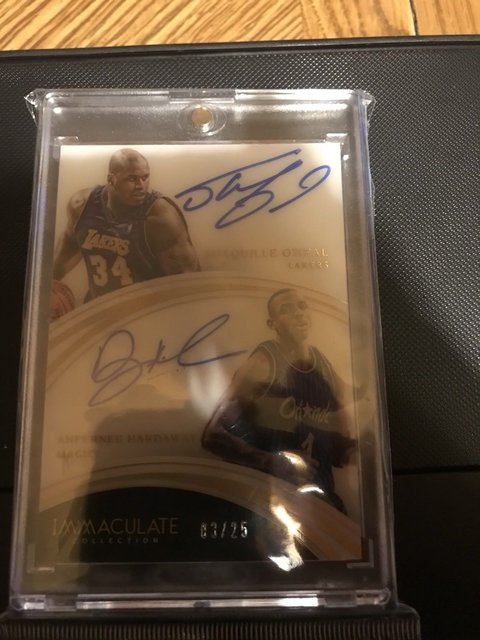 R2mi
Rookie of the year 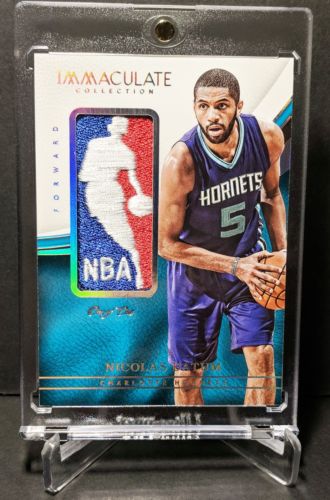 lthough the 2016-17 NBA collecting season is coming to a close, things are certain to become
a whole lot more immaculate before it’s gone for good.

In early October, Panini America’s vaunted Immaculate Collection franchise will arrive
with a new 2016-17 edition that’s steeped in the requisite richness of some of collecting’s most outstanding memorabilia cards.

But as has become customary, the newest iteration of the beloved brand will be about so much more than
just jumbo jersey pieces, iconic Logoman gems and once-squeaky sneaker pieces.

ust when you thought it was safe to call an end to the last season of basketball cards, Panini America comes through
with another release that is slated to begin before the next campaign starts – 2016-17 Panini Immaculate Collection .

A super premium release with five autographs or memorabilia cards per box, there is plenty to get excited about
in the form of cards signed by multiple players and swatches that include cover shoe pieces and the prized Logoman patch.

One of the cards inside each box of 2016-17 Immaculate Collection will be either a base set card or parallel.

Naturally, there will be Rookie Patch Autographs and those cards are going
to have prime versions which have premium swatches along with on-card ink.

Set to arrive in hobby shops across North America on October 4, each hobby box of 2016-17 Collection
(six cards per box, five boxes per case) will deliver five autograph or memorabilia cards.

(A small quantity of 2016-17 Immaculate Collection boxes will be featured in Panini America’s new “1st Off The Line” program that
will offer collectors an exclusive Emerald parallel and early access to the product.

“1st Off The Line” boxes will sell at the stated SRP for each product and there will no price increase.)

Even though an added swatch is nice, there are also several 2016-17 Immaculate Collection choices that have just a hard-signed autograph.

Choices here include Milestones for the key moments, as well as Dual Autographs, Triple Autographs and Quad Autographs,
which connect the players through their team, draft class, country of origin, or other aspect.

In promotional materials provided by Panini, several collections of autograph and memorabilia cards were teased.

Dual, Triple, and Quad Autographs will combine players based on such common ground as teams, country of origin, or draft class.

Milestones is all about individual player accomplishments and will appeal to those who appreciate the history of the game.

On the memorabilia side, there are some interesting concepts that Immaculate has become known for over the years.

Expect to find some one-of-one sweetness with Nameplate Nobility, which allows a collector to potentially spell out a player’s
last name from the back of their jersey.

It gets even better with Logoman, which are one-of-ones as well and are some of the most coveted cards for any player collector.

Previous Immaculate releases have featured pieces of game-used shoes to great acclaim and there are a couple of new twists this time.

It all begins with Sneaker Swatches, but gets crazier with the jaw-dropping Sneak Peek cards that have
giant unique pieces which are the stuff cardboard dreams are made of.

New for this season are Laces and Tongues, which could produce a bit of excitement in the hobby as well.

Sneaker Swatch Signatures takes a hunk of a player’s shoe and matches it up with their ink.

Even crazier are the one-of-one Dual Rookie Logoman Autographs which put
two of those iconic patch pieces together with signatures of two different freshmen.

Likewise, if the memorabilia piece is nice enough and the design is strong, even an autograph
is not a requirement for a great card.

2016-17 Immaculate Collection relishes in that fact. Nameplate Nobility goes
with letters from a player's jersey.

The Basics : Among the memorabilia cards here will be jumbo jersey swatches, patches,
emblems, logos and logoman cards along with new approaches for shoe cards.

Those? Laces and tongues as part of the Sneak Peek and Sneaker Swatches cards.

These will showcase both past and present players, too.

There will, of course, be rookie patch autos with on-card ink along with dual, triple
and quad autos as well as dual logoman autos.

Quad autos will group players with same teams, draft classes and countries among others,
while there also will be signed Sneaker Swatch cards with notables like Shaquille O’Neal, John Stockton and Karl Malone in the mix.

Meanwhile, Milestones autos will spotlight big-time players’ big moments,
while Nameplate Nobility will let collectors spell out their players’ names from the backs of their jerseys.

These boxes carry a suggested retail price of $425 each.

2016-17 Immaculate Collection The product is rife with highlights that include . . .

These top rookie pairings feature on card autographs and logoman swatches from each!

Find a list that pairs players like Shaquille O'Neal, John Stockton, and Karl Malone with the rubber
and leather that kept their tires on the road!

Celebrate timeless NBA moments with the players who achieved them, and their autograph to commemorate them!

Looking for a chase? Each player features one unique card for every letter on his nameplate!

Every card is a one of one, and each displays a full logoman swatch!

- Shoes from some of the most iconic NBA stars of the past and present are incorporated throughout 2016-17 Immaculate Collection
in such chases as Sneaker Swatch Signatures, Laces, Tongues, Sneak Peek and Sneaker Swatches.

- The calling-card Rookie Patch Autographs and their parallel versions all feature prime memorabilia and on-card autographs.

- The Milestones insert celebrates timeless NBA moments with the players who achieved them and their autographs.
- Collectors looking for a challenging chase will certainly find it in the Nameplate Nobility memorabilia insert.

We’ll have plenty more on 2016-17 Immaculate Collection in the coming weeks right here on The Knight’s Lance.

An end-of-season delight for many high-end NBA collectors, 2016-17 Immaculate Collection
doesn't skimp on the quality or the price.

While this format is not much different than the 2015-16 product,
one new change is the debut of the "1st Off the Line" platform.

Exclusive cards are also part of the equation, in this case an Emerald base parallel (#/5) in every box.

Although the 2016-17 Immaculate Collection checklist does include base cards,
that's not why you're here.

Starting with the much-celebrated Rookie Patch Autographs,
Immaculate Collection lives up to its name in most aspects.

For the RPAs, that means prime relics and on-card signatures.

- Shoe Cards! Sneaker Swatch Signatures, Laces (new!), Tongues (new!), Sneak Peek,
and Sneaker Swatches all feature specific swatches from shoes of some of the most iconic NBA stars--past and present!

- 5 Autographed or Memorabilia Cards in Every Box!

- Sneaker Swatch Signatures – Find a list that pairs players like Shaquille O’Neal, John Stockton,
and Karl Malone with the rubber and leather that kept their tires on the road!

- Milestones – Celebrate timeless NBA moments with the players who achieved them, and their autograph to commemorate them!
- Nameplate Nobility – Looking for a chase? Each player features one unique card for every letter on his nameplate!

- Logoman – Every card is a 1-of-1 an displays a full Logoman Patch!


Until then, enjoy this extended sneak peek :

You could tell by the look on his famously bearded face that Houston Rockets superstar James Harden was locked in,
ready to put in work with that lethal left hand of his that’s virtually unstoppable when Harden gets on a roll.

And during a recent signing session with Panini America, Harden got on a serious roll.

He scored all afternoon long — every two or three seconds it seemed — and never once so much as even touched a basketball.

In his left hand instead was a pen — and one of the game’s most popular players wielded it magnificently.

Fueled both by his own uncanny ability to finish and compelling conversation
with Panini America Acquisitions Manager Tone Stakes, Harden went to work.

An hour or so later, the swagger-draped southpaw had delivered yet another signature performance :

A few jaw-dropping moments here, a few laughs there and consistently spectacular production throughout.

In the end, Harden had signed . . . everything. Outstanding redemptions dating back to the 2013-14 collecting season? Done.

Everything in between, like those Panini Instant cards from last season including one featuring a “Clutch City” inscription? Finished.

Harden’s signature is brief but bold; a profound piece of penmanship that’s instantly recognizable to fans and collectors.

It’s also seemingly forever in demand. But this particular signing session went a long way toward evening out the supply side of that equation — at least for now.

In the must-see gallery that follows, we showcase a dazzling display of Harden’s hard-signed handiwork. Enjoy . . .

It’s a tried-and-true recipe that has fans and collectors anxiously awaiting Wednesday’s release of 2016-17 Immaculate Collection.

As you’ll see in the mini Quality Control Gallery that follows, this year’s product once again
delivers the multi-signed masterpieces that have captivated collectors over the last few seasons.

On average, each hobby box of 2016-17 Immaculate Collection (six cards per box, five boxes per case)
will deliver five autograph or memorabilia cards.

We offer just a small glimpse at the product in the imagery below.

Enjoy the sneak peek and stay tuned to The Knight’s Lance for continued coverage,
including your first look at one “1st Off The Line” box.