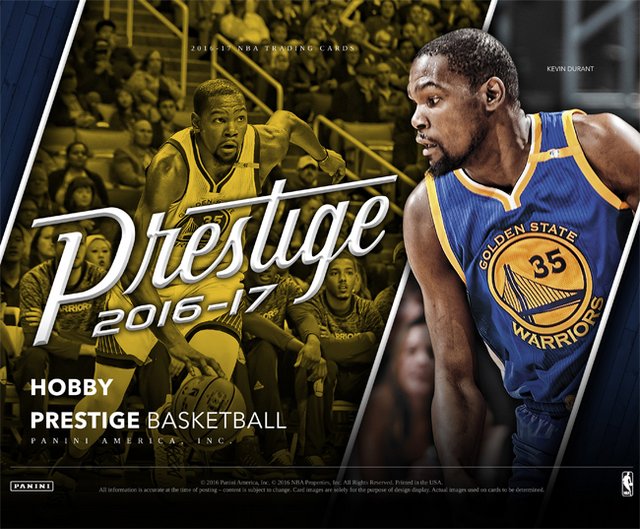 For the first time since the 2013-14 collecting season, Panini America’s popular Prestige brand is returning to its hobby roots.

After two straight years as a Target-exclusive release, 2016-17 Prestige will reemerge in the hobby
with a bold reintroduction that includes a new configuration, new designs, a high-end feel and an affordable price tag.

Set to arrive in hobby shops across North America in early March, each hobby box of 2016-17 Prestige

(six cards per pack, 24 packs per box, 16 boxes per case) will deliver two autographs,
one memorabilia card and 24 inserts or parallels on average.

The hobby-exclusive Playmakers, Picks and Pros inserts feature new designs, are printed on holofoil board
and fall roughly once per case, on average.

- Old School Ink is back! The collector favorite features a classic look and feel coupled
with some of the game’s greatest and most collectible signatures.

- Other hobby-only inserts include Reminiscent, Stat Stars, Hardcourt Heroes, Prestigious Pioneers and Teamwork,
each featuring a Rainbow version numbered to 10.

- Showcasing the stacked 2016 NBA Draft Class, Prestigious Picks features a unique design on holo board stock (so it really stands out!)
and falls one per case on average.

- The ultra-rare Playmakers insert has become a collecting staple of the Prestige brand.
- Look for these gems to fall one per case on average.

Exclusive to Target over the last few years, 2016-17 Prestige sees the NBA brand finally return to the hobby lineup.
Every hobby box promises a trio of hits with two being autographs.

In addition to a standard base set, collectors can find a variety of signed inserts in the 2016-17 Prestige checklist.

Back in the mix, Old School Ink takes a retro approach with all-time greats.

Among the other hobby exclusives are Preeminent Ink and Stars of the NBA Autograph inserts.

After two seasons as a retail-only release, 2016-17 Panini Prestige Basketball is heading to hobby shops
in early March with plenty of hits expected inside every box.

In fact, each pack of Prestige will contain either and insert of parallel in addition to the possibility of pulling an autograph or memorabilia card.

The ink is coming twice per box along with one card featuring game-used or player-worn material.

Panini America is attempting to offer a high-end feel at an affordable price with his release
and it will tie in perfect with the company’s upcoming Player of the Day promotion.

Sales materials for 2016-17 Panini Prestige did not reveal any details regarding the base set at this time,
but it is known that it will have some form of parallel.

One thing Panini America has been delivering as of late in many of its NBA releases is inserts that are limited case hits.

This time, expect to be on the hunt for sets like Playmakers, Prestigious Picks, and Pros. All are printed on holographic foil board.

Other expected inserts in 2016-17 Panini Prestige Basketball are Reminiscent, Stat Stars, Hardcourt Heroes, Prestigious Pioneers,
and Teamwork. For an additional challenge, each of these sets have a Rainbow parallel that are limited to 10 copies each.

The base set size and basic design for this one was not revealed but there will be a number of insert sets
with players from the past and present as well as the new rookie class.

Among those will be six different autograph sets that include Oldschool Ink, Prestigious Premieres and NBA Passports.

Hobby-only ink will include Preeminent Ink, Stars of the NBA and Distinctive Ink
and each of these will have a Rainbow parallel limited to only 10 copies. …

Among the inserts will be Playmakers (one per case), Reminiscent cards that pair rookies
with veterans and Prestigious Picks that focus on new draft picks and are also found one per case.

Also in play will be Prestige Pros also found one per case as well as Stat Stars, Hardcourt Heroes, Prestigious Pioneers and Teamwork cards.
They’ll also have Rainbows (/10). … Boxes will carry a suggested retail price of $96.

This one also coincides with an NBA Day promo.

Signatures from the biggest stars from the past and present along with the game’s future can all be found in Prestige this season.

Old School Ink returns to the brand with a retro look and NBA Passport Signatures have a great look. Also included
in the lineup are Prestigious Premieres, Stars of the NBA, Preeminent Ink, and Distinctive Ink.

Some of these sets will have a Rainbow edition (/10) as well.

At this time, no details were presented regarding the memorabilia cards that could be pulled
from packs of 2016-17 Panini Prestige.

* One of each in every case on average

- 2 Autographed Cards in Every Box!

- Old School Ink is back! The collector favorite features a classic look and feel coupled with some of the game’s greatest and most collectible signatures!
- Hobby Exclusive Autograph Cards!
- Find an incredible mix of signatures from NBA Greats, NBA Rookies, and NBA Veterans in six distinctly themed autograph sets!
- Preeminent Ink
- Stars of the NBA
- Distinctive Ink
- Prestigious Premiers
- NBA Passport
- Previous three have a Rainbow Parallel #’d to 10

- 24 Inserts/Parallels in Every Box!
- Reminiscent – Pairs members of the 2016-17 NBA Rookie Class with a veteran player with a similar skill set!
Other combinations include: Kevin Durant/Brandon Ingram, Jimmy Butler/Jaylen Brown, & John Wall/Kris Dunn.

- All three are newly designed, printed on special holo board!

We’ll have plenty more on 2016-17 Prestige in the coming weeks right here on The Knight’s Lance.

But until then, here’s an extended sneak peek: 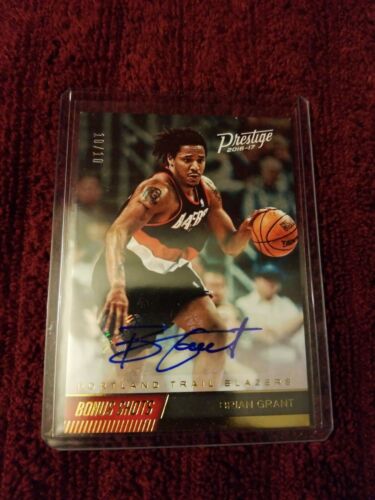 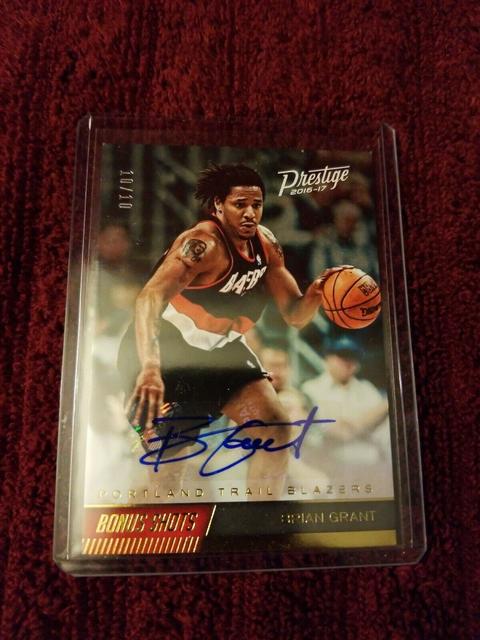 In addition to a broad base set, colorful action photography and lots of parallel chases, 2016-17 Prestige also delivers a robust roster of autograph
and memorabilia cards and the rare Playmakers, Prestigious Pros and Prestigious Picks inserts.

In the must-see gallery that follows, we showcase just some of what was discovered during the QC process.

On average, each hobby box of 2016-17 Prestige Basketball will deliver two autographs and one memorabilia card.
In addition, each case will deliver three total cards (and possibly a fourth)
from the Playmakers, Prestigious Pros and Prestigious Picks inserts.

Enjoy the preview and stay tuned to The Knight’s Lance for continued coverage.

Spoiler : :
2016-17 Prestige Base Veterans / Rookies Set Checklist 200 cards
*Some autographs only found through the Panini Rewards program. They are noted below.*