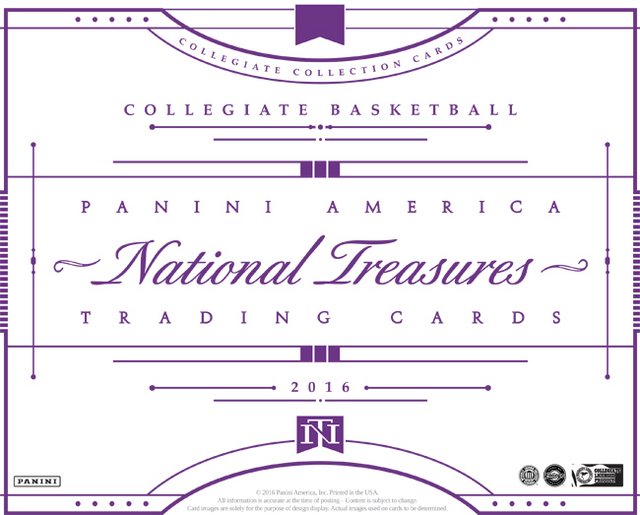 The product features short-printed, serial-numbered cards of NBA rookies, superstars and legends
and a vast array of premium autographs and memorabilia.

On average, each eight-card box of 2016 National Treasures Collegiate
will deliver six autograph or memorabilia cards and two base or parallel cards.

Look for Brand Logo versions numbered to only two.

The 45-card base set is numbered to 99 and showcases the NBA’s best players from their collegiate days with Silver,
Gold, Black and Blue parallels numbered from 25 all the way down to one.

The 12-card Signatures insert features autographs from the likes of the “Big O,” numbered to 25
or less with Printing Plate versions numbered to only one.

Falling two per box, the 45-card base set is limited to 99 copies with Silver, Gold, Black and Blue parallels,
each numbered to 25 or less. Other than that, the high-end college set is all about the premium inserts.

This season, collectors are being given plenty of premium options when it comes to NCAA products from Panini America
and 2016-17 Panini National Treasures Collegiate Basketball looks to take that segment of the hobby to new levels.

Keeping it to just 45 subjects, the 2016-17 Panini National Treasures Collegiate Basketball base set manages
to focus on big names in their school colors.

Limited to 99 copies each, they will have four parallel versions (Silver, Gold, Black, and Blue)
that are a tougher chase which includes one-of-ones.

The ink flows freely in 2016-17 Panini National Treasures Collegiate Basketball and there are signatures from rookies, stars,
and legends. Clean and simple designs rule the roost with sets like Team Logos, Notable Nicknames, and Signatures BK.

Notable Nicknames will include inscriptions while Signatures BK is made up of 12 different players
and are numbered to 25 copies or less (including one-of-one printing plates).

The action starts with College Game Worn, which includes pieces of game-worn jerseys that stars wore during their collegiate careers.
Team Quads are also expected to be a strong hit and combine four players from the same school or four stars.

Other memorabilia hits will include Brand Logo Duals and Combo Team Logos along
with the intriguing Team Slogan booklets.

With eight cards per box, which include six memorabilia or autograph hits, there is a mix of players
from the past and present including some of this year’s hot new rookies.

The Basics : The lineup and look here is similar to other NT releases
with autograph highlights including College Material Signatures

Team Logos autos, autographed booklets, Notable Nicknames and Signatures cards that will be limited
to only 25 copies.. …

Other memorabilia cards will include Team Quads and Brand Logos.

The 45 basic cards will be limited to 99 copies with a rainbow of parallels that includes Silver,
Gold, Black and Blue parallels from 25 copies down to just one. …

It features Short-Printed, Serial-Numbered cards of Rookies, Superstars
and Legends from their collegiate days with a vast array of Premium Memorabilia.

Team Logos highlights the school were each player honed his craft while Notable Nicknames takes inspiration
from the on-court personas of the all-time greats.

Working with 12 players, the Signatures inserts are numbered to 25 or less and include Printing Plates (1/1).

Another rookie-centered insert is Combo Player Signature Booklets, this time in a book-card layout
with multiple relics and an autograph.

- 6 Autographed/Memorabilia Cards in Every Box!

We’ll have plenty more on 2016 National Treasures Collegiate in the coming weeks right here on The Knight’s Lance.

But for now, sit back and enjoy this exclusive sneak peek:

But what a way to finish.

Set to arrive in hobby shops across North America on Thursday, 2016 National Treasures Collegiate honors college basketball’s biggest stars
(including 2016 NBA rookies, veterans and legends alike) like only National Treasures can:
With a content-rich recipe of NT’s most in-demand calling cards.

Each box of 2016 National Treasures Collegiate will deliver 10 cards (as opposed to the advertised eight),
including up to six autographs.

In the revealing Quality Control Gallery that follows, we take you through many of the product’s highlights.

Enjoy the gallery and stay tuned to The Knight’s Lance for continued coverage.

Panini America is ringing in the new year with a new-product bang this week. Over the course of the next two days,
five new products from five different sports will arrive in hobby shops across North America.

Tomorrow may be even hotter (if that’s even possible) with the release of 2016 Contenders Football
and 2016 National Treasures NASCAR Racing.

But we’ll worry about tomorrow . . . tomorrow. With this week’s barrage of Quality Control Gallery Preview posts complete,
we can now turn our attention to the box-level previews provided by our Teaser Gallery posts.

So grab a chair and some down time and get ready to go card by card through three boxes.

Enjoy the imagery and stay tuned for continued coverage of this action-packed release week.