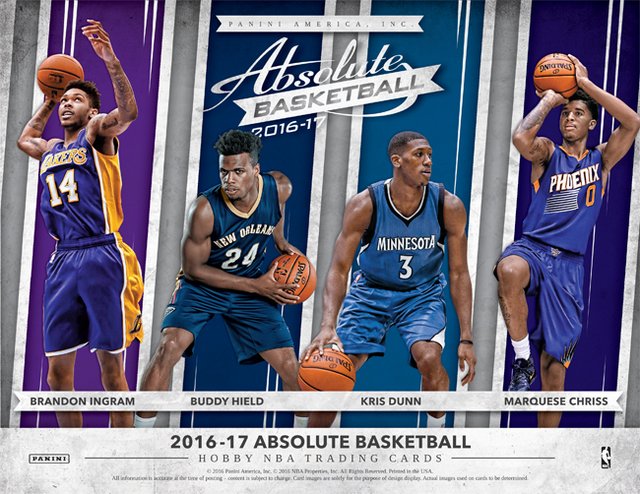 Adding to the base set are Rookie Autographs, which are signed on-card, for the notable draft picks from the 2016 class.

Panini America’s Absolute franchise made its name many years ago primarily with a must-see memorabilia lineup that helped
it become one of the most endearing brands in hobby history.

Over the years and regardless of sport, Absolute has added to its arsenal by introducing additional calling-card components such
as Tools of the Trade, Marks of Fame and more.

We say all of that to say this: A new season of Absolute is coming soon with 2016-17 Absolute Memorabilia set
to arrive in hobby shops across North America in mid December.

Once again this season, the product is equipped to impress and will deliver, on average, four autograph or memorabilia cards per box
(five cards per pack, four packs per box, 10 boxes per case).

- Find on-card Rookie Autographs and Draft Day Ink inserts.
- Absolute’s popular Glass cards return and will fall roughly once per case.
- On-card autographs of your favorite veteran and retired players in the Heroes Autographs
and Marks of Fame inserted numbered to 75 or less.

Also focusing on the first-year players, the Draft Day Ink inserts are hard-signed, as well.

They feature an image from the day the rookies officially joined their NBA team.

ast season, Panini America brought back one of its long-standing brands to the roundball market after a two-year absence and it made
a strong enough impression with collectors to return to card shops.

With 2016-17 Panini Absolute Memorabilia, the focus is once again on the hits as each hobby box is slated
to contain four autograph or memorabilia cards.

Base Set and Inserts

Preliminary promotional information did not deliver any details regarding the base set or parallels
for 2016-17 Absolute Memorabilia, but it is expected to have a strong selection of rookie cards
from players making their NBA debuts in the coming weeks plus those that may be delayed
due to injury, like first overall pick Ben Simmons.

One of the main selling features of 2016-17 Panini Absolute Memorabilia
for collectors is the presence of on-card autographs from legends, stars, and rookies.

For the vets and retired greats, there are sets like Heroes Autographs
and Marks of Fame that are numbered to 75 copies or less.

When it comes to freshman signatures, there are some solid options to potentially pull
from the Rookie Autographs and Draft Day Ink collections.

Tools of the Trade are back in 2016-17 Absolute and each of these cards has up to six swatches on them.
The pieces embedded into these treasures includes those from a jersey along with items such as hats, socks, and even basketballs.

The other theme for memorabilia cards made available at this time are the Frequent Flyers
and Freshman Flyers which have a similar design and the potential to have large prime swatches.

Moving to the veteran and retired options, 2016-17 Absolute Memorabilia gives props to the older players with Heroes Autographs
and Marks of Fame. Numbered to 75 or less, the inserts showcase on-card signatures for options like Kobe Bryant and Bill Russell.

These inserts include relics such as jerseys, hats, socks and basketballs.

Frequent Flyers Materials and Freshman Flyer Jumbo Jerseys honors the players who spend much of their time above the rim.

Dropping one per case, Glass inserts offer a limited non-hit card to chase.

- 4 Autographed or Memorabilia Cards in Every Box!

We’ll have much more on 2016-17 Absolute in the coming weeks here on The Knight’s Lance.
Until then, enjoy this extended sneak peek :

calling cards, if you will, that collectors look forward to every season.

For some, it’s the multi-memorabilia cards found in Tools of the Trade, Team Tandems, Team Trios and Team Quads.

For others, it’s inserts like Frequent Flyer . . . Spectrum parallels . . . the abundance of signatures in Iconic Ink or Heroes . . .
the plethora of rich rookie content . . . the rare Glass inserts.

The good news? All of those elements and more are coming to 2016-17 Absolute Memorabilia.

The better news? 2016-17 Absolute Memorabilia is coming next week. Set to arrive in hobby shops across North America next Wednesday
(perfect timing for that last-second holiday shopping), 2016-17 Absolute will deliver one autograph or memorabilia card per pack.

In the revealing Quality Control Gallery that follows, we bring you a coast-to-coast preview of 2016-17 Absolute.

Enjoy the early glimpse and stay tuned to The Knight’s Lance for continued coverage.

Last-minute holiday shoppers seeking just the right gift for the trading-card-loving sports fans in their lives,
well, Panini America’s got you covered.

Beginning tomorrow in hobby shops and on group-break sites across North America, Panini America will release
a trio of new releases in 2016-17 Absolute , 2016 Certified NASCAR Racing and 2016 Preferred Football.

As is our custom, we’ve done our best here on The Knight’s Lance in recent days to properly prepare you for the impending releases
with Quality Control Gallery previews of Preferred Football, Absolute and Certified Racing.

Today, we begin taking you directly to the box level with the first of our Teaser Gallery posts
starting with a pack-by-pack exploration of 2016-17 Absolute.

In the gallery that follows, we take you through five early boxes of the product that delivers four autograph
or memorabilia cards per four-pack box and rich roster of rookie, veteran and legend autograph and memorabilia content.

Enjoy the Absolute experience and stay tuned to The Knight’s Lance for continued coverage.