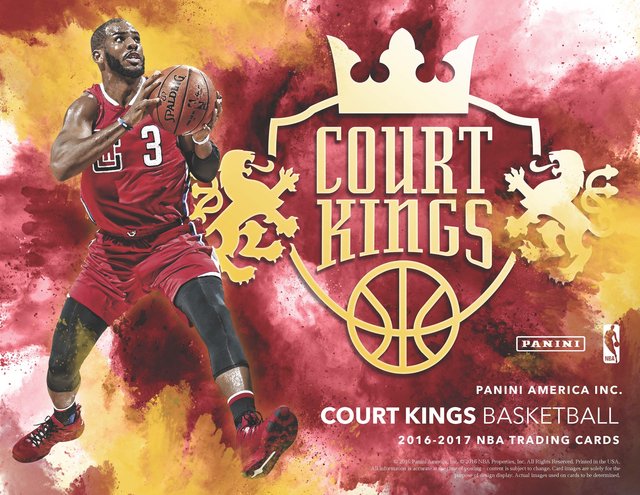 Showcasing a large color wheel and a focus on artistic designs, 2016-17 Panini Court Kings
maintains its reputation as one of the more distinct NBA releases each year.

Collectors can find one memorabilia card and one autograph card in every hobby box.

Like previous seasons, the base set is joined by multiple tiers of rookie cards, each with a different design.

Starting with Rookies I, there are four total versions to chase for 25 first-year players.

Representing the memorabilia cards that average one per box, The Performance Art Jerseys features the stats
and images from the game where the jerseys were used.

Taking a similar level of creativity as the base set, regular inserts in 2016-17 Court Kings utilize
several themes and a unique look.

Among the five choices are AKA inserts, centered around player nicknames, as well as Arc-Eologists
for the the best shooters in the league.

Panoramics goes widescreen with impressive photography while Rookie Royalty looks back
to the debut seasons for top players.

- Court Kings is loaded to the brim with rookie content, with 25 of the top newcomers featured
in four unique rookie cards.

- Additionally, find ON-CARD Autographs from the newest NBA stars in sets like :

The intersection of art and sports can be a great thing and when it comes together on trading cards,
you end up with 2016-17 Panini Court Kings Basketball.

Each box is jam-packed with hits and cuts right to the chase with an autograph and a memorabilia card
to go along with a pair of rookies, an insert, and an oversized box topper that is suitable for framing.

Many of today’s top stars will be part of the 2016-17 Panini Court Kings Basketball base set
and there are four of them in each box.

The rookie component of the set is limited to 25 different freshmen, but they will have
four different cards each featuring eye-catching designs.

Last year, the Aurora insert set was tough to find and created some buzz and it
is back again in 2016-17 Panini Court Kings.

It will be joined by four other collections which include the nickname-themed AKA and Arc-Eologists,
which examines the best three-point shooters in the game.

Autographs are drawn from a roster that includes 20 retired greats.

The box toppers have three distinct themes. Rookie Royalty takes a look back at a player’s
debut season while Panoramics have incredible game photography.

Rookie autographs are at the forefront in 2016-17 Court Kings and are hard-signed.

Sets include Heir Apparent and Fresh Print, which the latter having an all-new color variation.

The only memorabilia collection that Panini has announced thus far are The Performance Art Jerseys.

These cards will connect collectors with the game as details and photography
on the card reflects the game the jersey swatch was worn in.

- Court Kings brings you closer to the game with The Performance Art Jerseys insert.
- Each of these cards feature swatches, statistics and photography from the actual game the player wore the jersey!

- Aurora returns this year with an updated design and player list.
- Be on the hunt for five unique inserts in this year’s release!

- Every box of Court Kings comes with an over-sized Box Topper insert.

- Panoramics – A super-sized display of beautiful wide-angle photography
- Rookie Royalty – A star-studded set that hearkens back to players who excelled in their rookie year
- Autographs – An ON-CARD Autographed insert set that features more than 20 legends of the NBA!

When discriminating hoops collectors really want to get down to the art of the matter,
there’s really only one place to go.

And later this week, the popular collecting work of art that is Panini America’s Court Kings opens for another excellent exhibit.

Set to arrive in hobby shops across North America on Friday, 2016-17 Court Kings returns to regale
by portraying the NBA’s biggest superstars, hottest rookies and greatest legends with the unique painting effects that have come
to impress even the most intense critics.

On average, each 10-card box of 2016-17 Court Kings will deliver one oversized box-topper, one autograph,
one memorabilia card, one portrait, two Rookie Cards, one insert and four base cards.

Once again this season, Court Kings will also deliver a bevy of hard-signed rookie autograph content
and the colorful, one-per-case Aurora chase.

The scarcest of the four versions will fall once every other case, on average.

Also returning this season, the game-dated Performance Art memorabilia cards featuring the date
on which the corresponding jersey was worn and an image of the featured player wearing it.

In addition, autograph versions of the popular Box Toppers will fall once per case, on average,
but will not replace the regular autograph hit.

We’ll have more on 2016-17 Court Kings in the lead-up to release day right here on The Knight’s Lance.

But until then, enjoy the revealing Quality Control Gallery that offers a brilliant showcase of this truly artistic release.

Panini America’s 2016-17 Court Kings arrives in hobby shops across North America on Friday and you can bet it will be basking
in the trademark blend of vibrant colors, artistic nuance and NBA majesty that has served the product so well
during a decorated run that started with the 2009-10 release.

As you saw in yesterday’s Quality Control Gallery, everything that collectors have come to covet in Court Kings

In the Teaser Gallery that follows, we take you card by card through five early boxes of 2016-17 Court Kings Basketball,
an aesthetically pleasing experience that showcases the refreshing nature of the brand.

On average, each 10-card box should deliver one autograph, one memorabilia card, two Rookie Cards, two inserts or parallels
and four base cards. But as you’ll see, one of our boxes delivered a bonus 11th card in the form of a second autograph.

Stay tuned to the Panini America social media channels in the coming days. We have one more box
to open and we’re going to give away the contents.