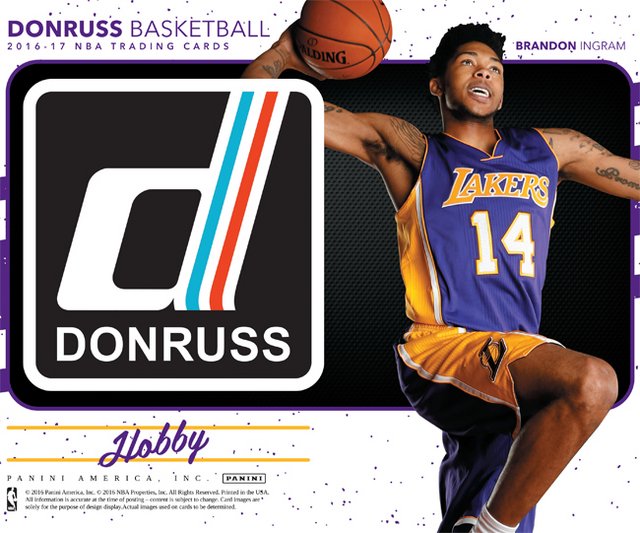 Panini America’s flagship Donruss brand is riding a tremendous wave of momentum these days, what
with the recent successes of 2016 Donruss Baseball

and 2016 Donruss Football still fresh in the minds of many collectors.

In mid-November, the flagship brand arrives on the hardwood ready to impress with its own merits.

Each hobby box of 2016-17 Donruss Basketball (12 cards per pack, 24 packs per box)
will deliver one autograph, one memorabilia card and 24 inserts.

The product relies on a stout 50-card rookie checklist and long-adored brand staples such
as Dominators, Elite Signatures and more.

- Dominators Signatures showcases both the best of today’s talent and some of
the most collectible retired players to ever step on the court.

- Rookie Materials Signatures includes both a memorabilia swatch and an autograph
from one of the top members of the 2016 NBA Draft Class.

- Elite Signatures features a checklist of 100 players with every card numbered to 99 or less.

- Thirty of this year’s top rookies are looking to dominate the new autograph market in Rookie Dominators Signatures.

- When a player arrives at the NBA Rookie Photo Shoot, he has his photo taken, card files are sent to the printer,
returned the the next day and signed — all within 24 hours.

- The result is aptly named Next Day Signatures insert.

Look for the ultra-rare, 100-card Optic Preview which features the 2016-17 Donruss
design printed on Optichrome technology.

Seemingly a rarity in today's premium-driven hobby, Panini's 2016-17 Donruss falls more
on the simple side of the collecting world.

Each hobby box promises a pair of hits in the form of one autograph and one relic.

Built around a comprehensive checklist, the base set includes 50 rookie players from the 2016 NBA Draft.

Perhaps not thought of as much for the hits, 2016-17 Donruss Basketball still offers several options for collectors.

Delving into the rookie class are signed inserts like Next Day Signatures which are so named
because they are photographed, printed and signed (on-card), all in a 24-hour period during the Rookie Photo Shoot.

Also, Rookie Materials Signatures comes in a base autographed relic edition (#/75)
and a Prime parallel (#/10).

- Dominators Signatures – Showcases the best of today’s talent and some of the most collectible retired players
to step on the court! Look for names like Karl-Anthony Towns, Kristaps Porzingis, Jason Kidd and Allen Iverson

- Like the autographs, the 2016-17 Donruss memorabilia inserts drop one per hobby box.

- Among the choices are Back to the Future relics that showcase players on their former teams.

Giving more options to set collectors are the inserts that fall one per pack.

Without a long history to draw from like baseball, one could argue that 2016-17 Donruss has
more of a retro vibe than a nostalgic one.

Much of the content comes from the brand’s past, primarily from other sports.
And the design lacks a lot of the flash found in many other sets.

Each 2016-17 Donruss Basketball hobby box, which should be one of the cheaper ones of the season,
comes with both an autograph and a memorabilia card.

Panini has yet to release much info about the main part of 2016-17 Donruss Basketball the base set.

A total of 50 rookies will be present. However, the composition of the veterans as well as the parallels remain a mystery.

Traditionally, Donruss sets have a large number of parallel sets.

Collectors will find no shortage of basic inserts. With 24 in a hobby box, each pack should have one.

But, like the base set, not much is available as to what these entail.

Optic Preview features 100 cards giving a sneak peek at what to expect when Donruss
is chromed out for its own release later in the season. According to Panini, these are tough.

Combine that with the sizable checklist and individual cards could prove to be on the rare side.

The hits in 2016-17 Donruss bring a lot of the product’s familiarity.

Rookie Dominator Signatures, Signature Series and Elite Signatures all have roots in the 1990s.

Elite Signatures brings with it a large 100-card checklist.
Base versions are numbered to 99 or less with Green (/5) and Black (1/1) among the parallels.

Next Day Signatures were created entirely at the Rookie Photo Shoot in August.

This includes the images, the cards being printed and the signatures.

Based on advanced materials, this is one of the few places in 2016-17 Donruss with on-card autographs.

Rookie Material Signatures include both autographs and memorabilia.
Base versions have 75 copies each.

Prime parallels are numbered to 10.

Although the inserts are newer than a lot of other elements in the product, Back to the Future still manages
to fit right in with the retro feel.

These memorabilia cards come with a swatch from a team the player used to play for.
The photo also has them with that earlier team.

In addition, limited Optic Preview inserts foreshadow another release on the horizon
and make use of Opti-Chrome technology for the 100-card set.

We’ll have plenty more on 2016-17 Donruss in the coming weeks right here on The Knight’s Lance.

Until then, enjoy this extended sneak peek :

UPDATE: Panini America Teams Up with the Dallas Mavericks for Special Promo Sets :