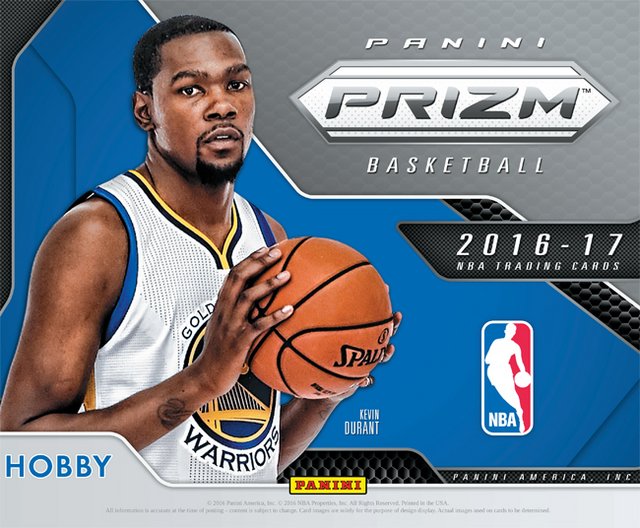 It’s hard to believe that almost five years have passed since Panini America
first introduced the basketball collecting universe to the brilliance of Prizm .

The brand first enthralled collectors with a rainbow array of Optichrome opportunities
during the 2012-13 season. In the years since, it’s become one of the most popular annual releases
in the Panini America NBA portfolio.

In early November, Panini America will pay tribute to the brand’s brief but vibrant history by injecting 2016-17 Prizm
with a special fifth-anniversary insert and the usual arsenal of visually arresting parallels.

Get all of the pertinent information on this year’s release after the jump.

- 2 Autographed Cards in Every Box!

- Chase your player’s rainbow with Prizm versions, ranging from un-numbered all the way down to one-of-one’s.
- NEW! Fifth Anniversary Prizm Parallel #’d to 5
- NEW! Explosion Prizm – Reserved for the most dominant and colorful personalities in the NBA
- Prizm Insert Sets – Prizm is reloaded with fun inserts, highlighting our favorite in-game moments, such as:
- First Step
- All Day
- Sky’s the Limit
- Go Hard or Go Home

Whether it seems like the Prizm brand just debuted or is a seasoned veteran of the basketball card landscape,
2016-17 Panini Prizm kicks off year five of the popular line with a detailed release that is filled with shine.

Sticking with the jumbo format from 2015-16, every hobby box includes two autographs.

Of course, what would Prizm be without a rainbow of parallels, and the base set has collectors covered with multiple choices.

This includes Fifth Anniversary (#/5) and Gold for base veterans and rookies,
along with many more Prizms to chase.

Back in the 2012-13 season, a revolution of sorts took place in the basketball card universe as Panini America unveiled
a new brand that became an instant sensation thanks to limited and eye-catching parallels.

Since that time, it has evolved and maintained its status as a collector favorite
and 2016-17 Panini Prizm Basketball will be its landmark fifth installment.

Loaded up with two autographs and 22 parallel cards per box, Prizm is going to also have plenty of rookie-related
content as this season’s freshman class begins to heat up in addition
to a broad selection of inserts that look great on foil stock.

Offering signed cards for present and future stars, the primary hits in 2016-17 Panini Prizm
include rookie-centered Autographs and Veteran Signatures, which contains some of the biggest stars in the NBA.

Each signed insert adds a healthy dose of colorful parallels.

There are also memorabilia inserts to track down.

Closing out 2016-17 Panini Prizm are several basic inserts. Explosion focuses on the key players in the league
with a vivid design while All Day concentrates on the elite players who never give up.

Other choices include in-game themes such as First Step, Go Hard or Go Home, and Sky's the Limit.

- In celebration of the aforementioned fifth anniversary, look for the special Fifth Anniversary parallel chase limited
to just five copies each

- Chase your player’s rainbow with colorful Prizm parallels ranging
from unnumbered versions all the way down to 1/1s.

- Look for Veteran Signatures and Autographs featuring a wide array of star players
from veteran superstars such as Kevin Durant and key rookies such as Brandon Ingram.

- 2016-17 Prizm is reloaded with fun inserts highlighting fan-favorite, in-game moments such as First Step,
All Day, Sky’s the Limit and Go Hard or Go Home.

- Explosions, Prizm most colorful insert is reserved
for the most dominant and colorful personalities of the game.

Upon the release of early details about 2016-17 Panini Prizm Basketball,
there was no confirmation of how big the base set will be.

However, it is traditionally loaded up with rookie cards on a checklist which
will include hot prospects like Kris Dunn, Brandon Ingram, Ben Simmons, and more.

Chasing the rainbow is a familiar concept for collectors breaking open boxes of Prizm and there is once again
a wide variety of parallels to track down for every card. While some versions will not be numbered,
there are some that are quite limited and run as low as a single copy.

Panini did add a new parallel for this season, though, and the Fifth Anniversary cards will be
a challenging chase as they are numbered out of five.

A handful of insert sets slated for 2016-17 Panini Prizm Basketball have been named in advance and the program
is led by Explosions, which have the game’s most dominant personalities in front of a background featuring fireworks.

All Day is dedicated to talents that are constant scoring threats.

Other concepts include Sky’s The Limit and Go Hard or Go Home.

Prizm is a great place to find signatures from both rookies and stars
and the latter make up the Veteran Signatures series.

The new recruits are on a sharp horizontal design, but both collections are certain to have several parallels to collect.

While not specifically shown in sales materials, there will be some memorabilia cards in this release.

We’ll have much more on 2016-17 Prizm in the coming weeks right here on The Knight’s Lance.

Until then, check out this extended sneak peek :

papounet
Rookie of the year

papounet
Rookie of the year

Panini America’s fabled Prizm franchise, the colorful brand that ignited an Optichrome feeding frenzy
during the 2012-13 NBA season, is still enthralling collectors all these years later.

Next week, the product will mark its landmark fifth anniversary with a robust 2016-17 Panini Prizm release that delivers
on all of the key brand tenets collectors across all sports have come to embrace. Colorful Prizm parallels.

It’s all vibrantly back on the collecting scene one week from today, and to help get you ready
for the highly anticipated release, we have an extensive Quality Control Gallery for your viewing pleasure.

On average, each hobby box of 2016-17 Prizm Basketball (12 cards per pack, 12 packs per box)
will deliver two autographs and a whopping 22 Prizms.

Bask in the Prizm glow amid the images that follow and stay tuned to The Knight’s Lance for continued coverage.

This time tomorrow, Americans will be welcoming (or not welcoming, depending on your personal leanings) a new President.

And while there’s no denying the bitterness of a riveting campaign season that pitted Hillary Clinton vs. Donald Trump,
we think we have a platform on which everyone, regardless of party affiliation, can stand : Panini America’s 2016-17 Prizm.

The colors. The rainbow chase. The Rookie Cards. The autographs.

They’re all back for a new season in 2016-17 Prizm Basketball, the Optichrome-enhanced collector favorite that arrives
in hobby shops across North America tomorrow in a Hobby Jumbo format featuring 12 packs with 12 cards each.

We offered a revealing deep-dive on the product last week with the must-see Quality Control Gallery.
Today, we’re taking you pack by pack through two early boxes.

One thing to note as you’re enjoying the imagery that follows : There’s a Lou Williams Prizm parallel numbered
to 25 that we pulled in our first box.

That particular card features the Prizm 5th Anniversary logo in the background.
That’s actually a production issue that impacted card #’s 101-200 only.

There’s a base 5th Anniversary parallel (card #’s 1-300) in which all cards are numbered to just five.

Panini America officials on Wednesday announced plans to create a special Mosaic Prizm set for customers who purchased
or will purchase — the company’s 2015-16 Replay Basketball product.

The set will include 100 Base Mosaic Prizms (encompassing both 2016-17 veteran stars and rookies) as well as Red, Blue,
Camo (numbered to 25), Gold (numbered to 10) and Black (numbered to only one) parallels.

In addition, there will be a 28-card autograph insert featuring signatures from top 2016-17 rookies
(including Brandon Ingram, Jaylen Brown, Buddy Hield, Kris Dunn and more) and superstars such as Stephen Curry,
Anthony Davis, Kevin Durant, Karl-Anthony Towns and more.

This promotion-exclusive set will utilize new photography not used in the base 2016-17 Prizm set and unique numbering.

Each box of the Mosaic Prizm set will include three 10-card packs and autographs will fall one every three boxes, on average.

The product will begin shipping to distributors and direct hobby shops that ordered 2015-16 Panini Replay on March 1.

Customers who purchased or will purchase 2015-16 Panini Replay should consult with their distributor
or hobby shop owner to claim or reserve their Mosaic Prizm packs.

We’ve provided a preview gallery of the cards below. Stay tuned for continued coverage.