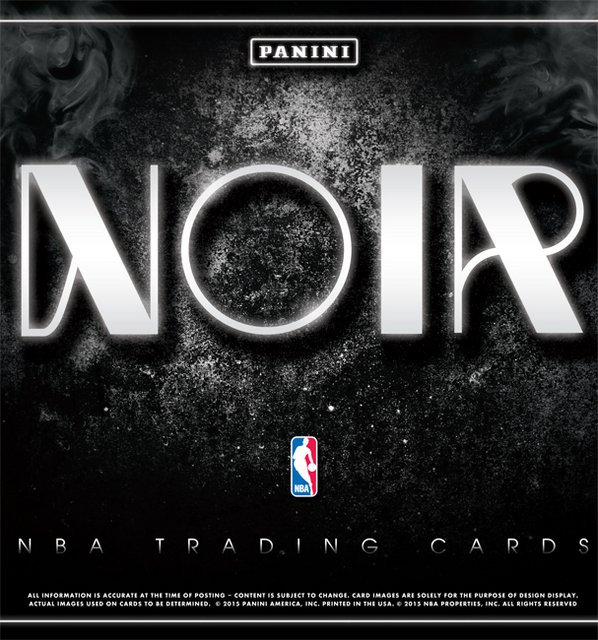 As the parade of high-end basketball releases makes its way to store shelves before the 2015-16 NBA campaign begins,
Panini America had just officially announced a late addition to its roster in the form of 2014-15 Panini Noir.

With seven autograph or memorabilia cards in each 12-card box, this collection is not for the light of heart or wallet.

Each signature is on-card and the presence of some seriously tough Noir Rookie Patch Autographs
is sure to generate plenty of interest from both collectors and investors alike.

Numbered to 99 copies each, Panini has noted that these cards will have two version – one in black & white and the other in color.

The company likened these variations to a mysterious classic noir film where there was always two stories to be told.

What else can be found in packs of this debuting product? Find out after the jump.

While early product information only gives scant details regarding the product’s content,
there will be Autographed Prime Black & White and Color autographed jersey cards.

The color version looks especially striking with the use of gold ink for the autographs.

Spotlight Signatures will have a similar visual impact due to the use of a gold paint pen.
Noir Signatures have also been teased by Panini in recent weeks via their social media feeds.

Little was revealed about memorabilia content outside of the China Jersey Patches cards which will contain pieces of special jerseys worn
by both the Houston Rockets and Golden State Warriors in games that celebrated the Chinese New Year in 2015.

A request has been sent to Panini to confirm the release date for this product
and this story will be updated once that information has been provided to Beckett Basketball.

2014-15 Noir delivers (7) Autographed or Memorabilia Cards in Every Box!

Noir is the Only product where you can land Jumbo Game-Worn Jersey Swatches
from the 2014-15 NBA Chinese New Year celebration!

Noir is the Only product where you can land Jumbo Game-Worn Jersey Swatches
from the 2014-15 NBA Chinese New Year celebration!

and then quickly removed them as the product wasn’t quite public knowledge at that point.

The rapid removal of those images certainly wasn’t missed by astute collectors, who were more than curious regarding
the reasons surrounding their disappearance. But now, the full story can be told. To be sure,

2014-15 Noir is a late-season offering from Panini that caters to the high-end with an artistic flair.
Each box promises a total of seven hits and all cards are signed on-card.

Both include contrasting options by way of a color and black-and-white version with mirrored designs.

Rookies are also found in Rookie Patch Autographs and numbered to just 99.

The Chinese New Year jerseys were worn by the Houston Rockets and Golden State Warriors during the 2014-15 season
and are exclusive to 2014-15 Noir.

Although the product was originally intended to be an international-only release in the same vein as 2014-15 Gala ,
a small amount will be made available to U.S. distributors.

The newest ultra-high-end release from Panini America was initially slated as the second
and final international-only release of the 2014-15 NBA product season.

But late last week, company officials announced that an extremely limited amount of the already-short-printed
product would be made available to U.S. distributors.

Set to release September 16, every 12-card box of 2014-15 Noir will deliver seven autograph or memorabilia cards.

Everything else you need to know about the uniqueness of Noir can be gleamed from reading the product’s official Product Information Document,
much of which is detailed in the preview gallery below. But here are some of the highlights . . .

Just like the mystery of a film noir, the Autograph Patch (rookies) and Autograph Prime (current stars and legends) chases have two stories to tell.
Each player in the sets has color and black-and-white versions that feature mirrored designs and stunning contrast.

Noir is the only product where you can land jumbo game-worn swatches from the 2014-15 NBA Chinese New Year celebration.

The newest members of the NBA are featured in Noir’s Rookie Patch Autographs sequentially numbered to 99.

Every autograph in the program is an on-card signature.

In 2015, the NBA celebrated the Chinese New Year with specially themed jerseys.
Noir is the only place to find patches directly from the Houston Rockets and Golden State Warriors jerseys worn in those games.

We’ll have plenty more on 2014-15 Noir in the coming days right here on The Knight’s Lance.

Until then, enjoy this extended first look including the reintroduction of those somewhat controversial CP3 images.