Build a better trading card. That is the simple principle on what Upper Deck was founded upon.
Today we continue to innovate and work to create the highest quality trading cards in the market.

Spawned from that continual drive and innovation comes the new Signature Kicks cards that will make their debut in the soon to be
released 2013-14 Exquisite Collection set.

Cards like this from Upper Deck prove there has never been a better time to be a Michael Jordan collector.

Enjoy this first look at just some of the amazing cards autographed shoe cards that will be available in this release.

SupaKool
Rookie of the year

The passage of time can have an interesting impact on even the most valuable and coveted of trading cards
and Upper Deck created something special a little over a decade ago when they released their Exquisite Collection product for the first time.
Today, that issue is regarded with even more reverence by collectors
and its success carries forward with the final release of the company’s 2013-14 schedule.

Expected on store shelves in early November, 2013-14 Exquisite Collection is a bonafide high-end release that offers up
a solid mix of autographs and memorabilia along with plenty of innovation that is sure to make some waves.

What can collectors expect to find in boxes of this product? Find out after the jump.

For fans of the first product from 2003-04, there is a special collection of Exquisite Rookie Tribute cards that depicts several of today’s top stars
and legends from the past on the iconic design utilized that year. The product’s information sheet shows a card of LeBron James
with a photo from his high school days and the company confirmed that they are actually using a game-used jersey from his days with St. Vincent-St.
Mary on these cards. Needless to say, there will be a lot of interest in this cards, along with others in the set which will have either
an autograph or an autograph with a piece of memorabilia.

The hunt for hobby treasures continues with an extremely limited base set where each card is numbered to 75.
Upper Deck decided to add some incredibly tough parallel versions of each of those cards

There will also be an Exquisite Rookie Card subset that features some of this season’s bright prospects in their collegiate uniforms.
Autographed and limited to 99 copies each, they will be among the first signed cards for several of these young talents to hit the market.

Every box of Exquisite is expected to deliver at least one Autographed Rookie Patch card
as part of the five autographs that are seeded into every box on average. There are some major hits of this nature to be pulled,
including Game Face Autographs and Year of the Horse booklets and the always-popular Dimensions shadowbox cards.

Where Upper Deck really brought their game to a new level with autographs this time are the Tegata Signature Impressions.
Each card will contain the depicted player’s thumbprint along with an autograph and they will be extremely limited.
The Tegata concept has been brought over from Upper Deck Authenticated’s popular line of framed pieces
and the chase for these cards will be intense.

If that was not enough, the company also added UD Signature Kicks to the lineup and these will feature pieces of soles,
heels, laces and logos from iconic shoes along with an autograph.
These beautiful pieces are sure to appeal to sneakerheads everywhere and the company revealed 18 players that will be depicted along
with the type of shoe that is being cut up and placed into the cards.
In addition to modern stars like James Harden and Paul George, look for pieces from Michael Jordan, Larry Bird, Magic Johnson and even Bill Russell.

With Panini introducing the Immaculate and Flawless brands to the ultra high-end card market,
it puts pressure on Upper Deck to evolve their comparable offerings.
2013-14 Exquisite Collection sticks with some familiar territory while carving out some new ground
for the original ultra premium line that debuted a decade earlier.

2013-14 Exquisite Collection boxes come with six cards, five of which are on-card autographs.

The first is a Rookie Autographed Patch card. Every box is guaranteed to have one.
The product also has autographs from select members of the deep 2014 draft class.

However, with Panini locking up several key players to exclusive deals, collectors will notice some names missing.

Continuing with the trend of shoe cards comes Signature Kicks. With Michael Jordan and LeBron James both Upper Deck being exclusives,
the set has something Immaculate couldn't offer. Exquisite also adds an autograph to the equation.

Signature Kicks use different parts of the sneakers including logos, laces, heels and soles.

Tegata Signature Impressions take from a premium memorabilia product offered by Upper Deck Authenticated
a large display that includes both a hand print and a player signature -- and shrinks it down to the size of a standard card.

Now hand prints can't fit on a normal card. Instead, Tegata Signature Impressions use a thumbprint with the autograph layered over top.

With 2013-14 Exquisite marking ten years since the brand debuted, the set features
a nod to the past with 03-04 Exquisite Rookie Tribute cards.

These take from the now classic rookie design that produced the most valuable rookie cards
of LeBron James, Dwyane Wade and others, and lends it to new cards.

Upper Deck has done this before in other products and sports as well.

Among the book cards are Year of the Horse and Game Face, which have both single- and dual-signed versions.

2013-14 Exquisite Collection has a few returning inserts as well.
Dimensions Signatures, Limited Logos and Exquisite Enshrinements are among those back for another year.

Base cards are numbered to 75 copies each.

This year, there are also color-based autograph parallels that follow the ROYGBIV rainbow : 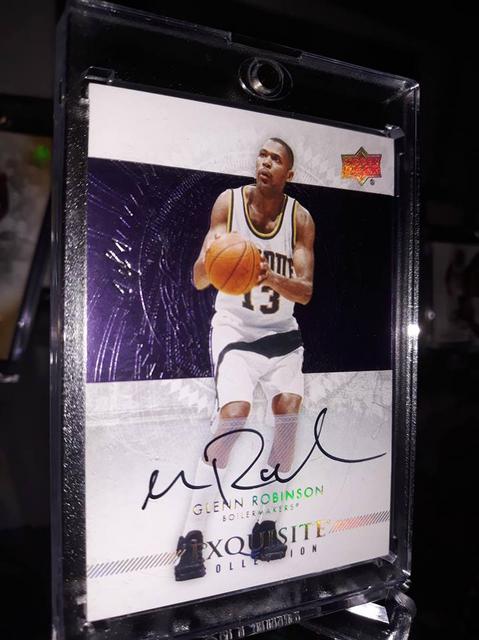 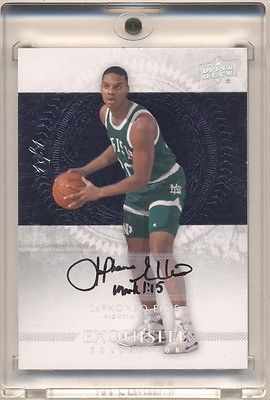